The artistry of bees

A story about bees at a world famous art museum.

Patrons at the Weisman Art Museum (WAM) on the University of Minnesota’s Twin Cities campus are in little danger of being stung by honeybees, despite their close proximity to 100,000 of them. Bees basically mind their own business, and they have much to attend to.

There are more bees atop the museum’s roof than all of the U of M’s faculty, staff, students, and other daily visitors combined. But the bees don’t take up much space. They live relatively quietly, if buzzingly, in two delightfully designed colonies, stenciled with abstract pollen and bee figures created courtesy of the Weisman, with each abode perhaps 30 cubic feet. Rent consists of a bit of honey, and a willingness to go about their tasks under the watchful eye of U of M researchers—an agreement to which the bees seem amenable. 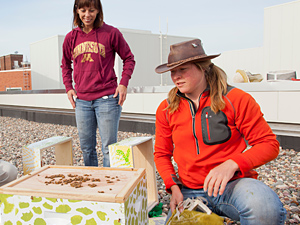 Jody Gerdts (foreground) and Becky Masterman promote bee health through training, education, and partnerships like this one with the Weisman Art Museum. ~Photos by Dave Hansen.

The bees were put atop the Weisman in mid-May by the U of M’s Bee Squad, in a partnership to educate the community about the need for bee-friendly landscapes, and about the trials and tribulations that bees face. Bees, it’s true, are beset by many challenges—not least of which, and really, let’s just admit it at this point—most of which are caused by humanity.

Brood disease, poor nutrition, and pesticides are killing bees, and dying bees pose serious consequences. As pollinators, bees are vital to growing fruits and vegetables. One-third of the nation’s diet depends on bees. Nowhere is this more apparent than in the grocery store, where no more bees means no more apples, no more onions, no more lemons and limes, and many, many other edibles. U researchers and others around the world have spent years sounding the alarm about declining bee populations.

Marla Spivak, a University of Minnesota entomology professor and internationally recognized honeybee authority, launched the Bee Squad program out of the University’s St. Paul Bee Lab three years ago, with a portion of the funding awarded to her as recipient of a “Genius Grant” from the MacArthur Foundation in 2010.

Bee Squad co-coordinators Jody Gerdts and Becky Masterman promote bee health in the Twin Cities metro area through training, education, and programs like the one with the Weisman.

Today, Gerdts and Masterman are visiting the hive, as they do every 12 to 14 days. To really appreciate how much goes on in these little boxes—to see how busy bees really are—it’s best to get on the roof and get your face in very close to the bees. No kidding. A beekeeping hat and veil are advised.

“Do remember,” says Gerdts, “that the season is changing—there’s a lot of older foragers out—the ones who are wise to the world, and they’ve been out looking for flowers all day. They’re kind of like long haul truckers—they bring back nectar and hand their load off to a house bee, who will then store it in a comb. So imagine you’re out working all day, and you come home and someone has torn your house apart,” she says, pulling out trays so onlookers can see the inner workings of the colony.

Admittedly, this takes some sweetness out of the experience, until Gerdts takes out a tray and dips her finger into the wax comb, where just below the surface lies succulent, delicious honey unlike anything you’re apt to find in a supermarket. Out it comes on fingertips and into eager mouths—and to the bees, this must be as if a meteor has crashed into their home. But without complaint they will assemble a crack team to repair the damage.

All abuzz with Google Glass: U of M staffer Andria Waclawski was selected by Google to test its new ground-breaking wearable technology, Google Glass. She came along to see for herself what all the buzz was about. Check out images and video of her experience through her own eyes at UMNexplorer.com. A sample video is below.

Bees work hard, sun-up to sundown, says Gerdts—forget about the 40-hour workweek. It’s overtime, every day. As fall approaches, the bees are getting ready for winter, making and stashing the honey they’ll need to survive. Honey beyond the bees’ needs—that succulent, delicious honey—will soon be for sale in the Weisman’s Shop, just another benefit of sponsorship.

But upon further inspection, Gerdts and Masterman can’t find the queen in one of the two colonies—the workers and the drones are without a leader. And it’s not the first time it has happened. This queen was last seen July 30.

It’s a trend they’ve noticed, and they can call it a trend because it’s happening at multiple locations among the 50 colonies they manage around the Twin Cities (from individuals to the Minneapolis Institute of Arts) through their various programs. The Weisman is participating in what the squad calls its “Hive to Bottle” program, where the squad takes care of everything, and the sponsor (the Weisman) doesn’t have to worry about a thing. They have two other levels, too (each at different costs)—a mentoring apiary, and a home apiary, each with lesser involvement from the squad.

“This huge new issue of queen failure—we don’t know why the queens are dying, but it’s happening to about 30 percent of our queens every year—they just die—or they’re superseded, which means the worker bees sense something and decide they need to be replaced,” says Masterman.

“We need a happy queen in here by September 1 in order to make sure she’s able to lay eggs and get them through winter,” she says, obviously concerned with the disappearance. Without the Bee Squad’s diligence, this colony would remain queenless, and wouldn’t survive the winter.

And that’s not the only issue. Another plague of the bees—varroa mites—suck the blood of bees in their pupating stage, weakening their immune system and vectoring viruses into the bee, says Gerdts. Fortunately, the mites, at least, can be controlled with vigilance, but without beekeepers these colonies would be wiped out within two years.

“Beekeeping is not the lazy man’s game—not anymore,” says Gerdts. “It used to be that way. You could just put a colony in your backyard and say, ‘Let me eat the honey when you’re done with this.’ You can’t do that anymore.”