Cutting edge optical sensor technology is being used in the Mississippi River basin to more accurately track the nitrate pulse from small streams, large tributaries and ultimately to the Gulf of Mexico.

Excessive springtime nitrate runoff from agricultural land and other sources in the Mississippi drainage eventually flows into the Mississippi River. Downstream, this excess nitrate contributes to the Gulf of Mexico hypoxic zone, an area with low oxygen known commonly as the “dead zone.” NOAA-supported researchers reported that the summer 2013 dead zone covered about 5,840 square miles, an area the size of Connecticut.

These optical sensors measure and transmit nitrate data every 15 minutes to 3 hours and are located at the mouth of the Mississippi River near Baton Rouge, LA, and at several large tributaries to the Mississippi River—including the Missouri River at Hermann, MO; Ohio River at Olmsted, IL; Ohio, Illinois River at Florence, IL; and Iowa River at Wapello, IA – to track how nitrate concentrations from different areas of the watershed pulse in response to rainfall and seasons.

About 622 million pounds of nitrogen were transported in May and June of 2013 at the Mississippi River Baton Rouge station, said Brian Pellerin, USGS research hydrologist. “This is roughly equivalent to the amount of fertilizer nitrogen applied annually to about 4 million acres of corn.” 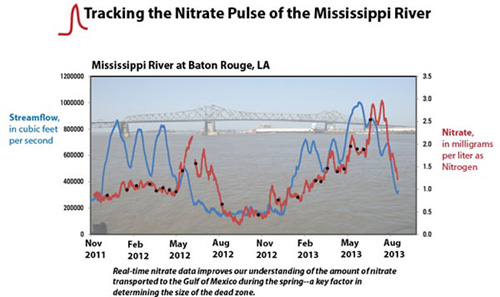 This graph shows the pulsing of the nitrate concentration of the Misssissippi River at Baton Rouge, LA, along with the streamflow at the same point, from November 2011 to August 2013. Image credit: U.S. Geological Survey

Nitrate sensors in Iowa, Illinois, Indiana, Nebraska, Kansas, Wisconsin, Missouri, and Arkansas provide new insights for researchers into the storage and transport of nitrate from headwaters to the Gulf of Mexico.

“Real-time information will improve our ability to measure the effectiveness of management actions by allowing us to track the movement and quantity of nitrate delivered from small streams all the way to the Gulf Coast,” said Lori Caramanian, the Department of the Interior’s Deputy Assistant Secretary for Water and Science. “These sensors will give us an unprecedented level of precision in tracing the origins of excessive nitrate, and will be a valuable tool in tracking progress toward the goal of reducing the size of the dead zone.”

Real-time nitrate monitoring in Iowa is being used by drinking water utilities to determine when to switch on nitrate-removal systems or when to mix water with multiple sources that have lower concentrations. Both actions result in higher costs for drinking water. “Real-time nitrate concentrations in the Raccoon River at Van Meter, Iowa, peaked at 20.7 milligrams per liter in May 2013. This is more than double the U.S. Environmental Protection Agency’s maximum contaminant level for drinking water,” said Kevin Richards, Director of the USGS Iowa Water Science Center.

The USGS, in cooperation with numerous local, state, and other federal agencies, currently operates over 52 real-time nitrate sensors across the Nation, of which 36 are in the Mississippi River Basin. These data are available at USGS Water-Quality Watch. Real-time nitrate monitoring is supported by the USGS National Stream Quality Accounting Network, Cooperative Water Program, and the National Water-Quality Assessment Program.

The USGS also continuously monitors water levels and streamflows at thousands of the nation’s streams on a real-time basis. These data are available at USGS Current Streamflow Conditions.