Ten years in the making

After a decade at the University of Delaware, Michelle Windle is beginning her professional career with Vita Plus, a premier agricultural feed company located in Madison, Wis. And to think that it all began with her knocking on the doors of professors in the Department of Animal and Food Sciences during her junior year as an undergraduate looking for a job.

As fate would have it, Windle ended up knocking on the door of Limin Kung Jr., the S. Hallock du Pont Professor of Animal and Food Sciences, and he offered her some hours in his laboratory. “To tell you the truth, at the time I had bright red dreadlocks. I don’t know what he saw in me, but I’m glad that he did,” said Windle.

Ten years later, after completing her bachelor’s and master’s degrees and recently receiving her doctorate from the University of Delaware — and being named a Benton Award winner as the outstanding doctoral student in the College of Agriculture and Natural Resources — Windle is heading off to the professional world.

Windle’s duties at Vita Plus will include a variety of activities, which suits her just fine, as she admitted to being a person who enjoys multi-tasking.

A large part of the job will entail conducting research into the development of new forage products for the company but she will also be looking into current vendors and staying up to date on new products, as well as training people on the products they are already using.

She will also be coordinating field research trials, troubleshooting nutritional problems on farms and educating farmers about how to make good silage – fermented feeds that are a major portion of rations fed to dairy cows – and keep healthy cows. 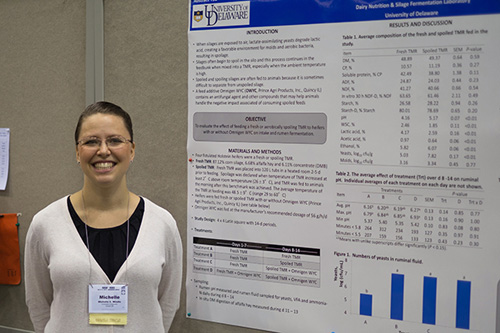 “The bottom line is healthy cows make good milk. So it is to everyone’s benefit to keep healthy cows and to practice good farming methods and management practices,” said Windle. “Technological advances to help with producing milk more efficiently have been coming at such a rapid pace that dairy producers are desperate for education in these areas.”

Windle said that this is the part of her job that she is most looking forward to, “bridging that gap between scientific findings and the every day reality that is farming.”

With regard to the silage aspect of her job, Windle is well-versed in the topic as she was advised by Kung, one of the country’s leading silage experts, and conducted her doctoral research on the subject, specifically looking at how to make starch more digestible earlier in the ensiling process.

“Cows need energy to produce milk and they get a lot of this from starch that is found in the corn fed to cows. So the more digestible the starch is, the more energy they get, the more milk they produce,” said Windle.

Her research looked at how to dissolve the protein matrix in the corn kernel to make the starch more available for digestion by bacteria in the cows’ stomachs. The research conducted by Windle and Kaylin Young, a former undergraduate in Kung’s lab, is continuing into the product development stage with several companies in the feed industry.

In addition to her doctoral research, Windle was also a teaching assistant, instructing classes as diverse as animal nutrition, which she taught for five years, animal production and genetics.

When asked why she decided to stay so long at UD, Windle smiled and said, “I am the poster UD child. I love it here.”

She said she loves the passion that all the professors have for their research, adding all they want to do is “tell you about what they’re working on and invite you to work on it with them. They have such excitement about what they do.”

As for the Department of Animal and Food Sciences in particular, Windle said that they are a very tightknit group, and that everyone in the department was asking her how it went after she had to defend her doctoral dissertation. “What I like the most about this department is the people, the passion and the caring that you get.”

Windle also singled out Kung, who she will forever be grateful to for answering the door that day and giving her an opportunity. “I can’t talk about Dr. Kung enough. I’m not just saying this. The guy is awesome. He’s got drive, excitement, he thinks silage is cool, he’s got the ability to inspire that in other students, I don’t know why he gave me a chance but I’m glad he did. It gave me a setting.”

Asked whether she ever thought about what her life would be like had Kung not answered the door that day, Windle smiled and said, “Honestly, I don’t know what would’ve happened. I’m a firm believer that things happen for a reason. I’m really glad that it worked out the way that it did — really, really glad.”