Adolescents who smoke cigarettes or use alcohol or marijuana may be at greater risk for subsequent abuse of prescription opioids as young adults, according to a new study by Yale School of Medicine.

The researchers believe their findings are the first to demonstrate that early alcohol, cigarette, and marijuana use are all associated, to varying degrees, with a two- to-three times greater likelihood of subsequent abuse of prescription opioids. The study appears online in the Journal of Adolescent Health. 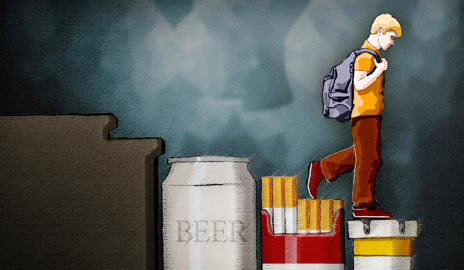 The researchers set out to determine whether certain tenets of the so-called “gateway hypothesis” applied to subsequent abuse of prescription opioids — specifically, whether substance use in the adolescent years was associated with later abuse of harder drugs. They studied demographic and clinic data collected from 18- to 25-year-olds from the 2006-2008 National Survey on Drug Use and Health to determine the likelihood, based on their prior usage.

The Yale study could lead to much more targeted efforts at prevention. “Given that there are now an estimated three and a half million young adults who abuse prescription opioids and this number is growing, our study of the data shows that efforts to target early substance use may help to curb this increasing abuse of prescription opioids,” said lead author Dr. Lynn Fiellin, associate professor of medicine at Yale.

Other authors are Jeanette Tetrault, William Becker, David Fiellin, and Rani Hoff of Yale School of Medicine. The study was supported by grants from the Robert Wood Johnson Physician Faculty Scholars Program, the National Institute on Drug Abuse, and the Department of Veterans Affairs in West Haven, Connecticut.