In a study published in the very first issue of the new journal JAMA Psychiatry, researchers from Sainte-Justine University Hospital Center, University of Montreal and King’s College London have shown that personality-targeted school interventions delivered to high risk adolescents manage to reduce and postpone problem drinking, which is responsible for 9% of the deaths in young people between the ages of 15 and 29 in developed countries. Furthermore, by delaying alcohol uptake in at-risk youth, low-risk youth apparently gain group immunity due to reduced drinking within their social network.

“Two factors determine problem drinking: personality and peer pressure,” explains Dr. Patricia Conrod, the study’s first author, who supports the assumption that approaching at-risk youth from the angle of mental health rather than information on the dangers of alcohol is more effective at preventing early-onset alcohol misuse. “Teaching young people how to better manage their personality traits or vulnerabilities helps them make the right decisions in given situations,” she explained, “whether it is a matter of overcoming their fears, managing thoughts that make them very emotional, controlling their compulsions, analyzing objectively the intentions of others or improving their self-perception.” 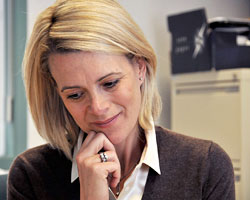 The researcher conducted a two-year study called Adventure in which high-school school staff in London, England, were trained to intervene with their ninth grade students (median age of 13.7 years) in order to determine whether their intervention could reduce or postpone the participants’ misuse of alcohol in the long term. The development of consumption patterns was measured by observing the drinking rates, problem drinking rates, binge drinking rates, and growth in binge-drinking rates. In addition, the study also attempted to examine a possible group (“herd”) immunity effect associated with these interventions.

Participating schools were divided into two groups (control and intervention). The “intervention” school group conducted the intervention at the beginning of the study, whereas the “control” school group benefited from the program and training later on. Out of the total sample, 1,210 students were identified as being more at risk of developing future alcohol dependence after having filled out a personality questionnaire. They presented at least one of the following personality profiles: “anxiety-sensitivity,” “hopelessness,” “impulsivity” or “sensation-seeking.” Trained school facilitators met these students during two brief personalized group sessions and asked them, based on their personality profile, to describe their reactions to various real-life scenarios and try to react to them in a different way.

“The advantage of this approach is that it is easy to implement as opposed to community-based approaches. Teachers can be trained to implement the program and closely adhere to its objectives very effectively, especially since only two interventions are required,” explained Dr. Conrod.

A similar study is now under way in 32 high schools in Montreal, Canada. The study is also adding a component that analyses youth styles of thinking. Schools interested in taking part in the program can visit the project’s website at www.co-venture.ca