Technology in the Classroom

Susan McGeary, associate professor in the Department of Geological Sciences at the University of Delaware, incorporated clickers and UD Capture for the first time in spring 2012 to see if she could increase student participation. What McGeary did not expect was the level of engagement in her Geological Hazards course, which is a 250-300 person class.

“Clickers seemed to remove the barrier between me and the students; they approached me more, asked more questions, were more involved during the class — it was exciting,” McGeary said.

Polling really got the students to talk to one another and share their experiences. Asking a question as simple as, “Did you experience the Virginia earthquake?” prompted discussions of how far away students felt the quake and their experiences, which led into a discussion of plate tectonics.

McGeary also used clickers to pre-test the class before lessons to identify common misconceptions about geological topics. “A lot of students come into the class with a previous conception, like that most of the Earth is made of molten liquid, thanks to Hollywood,” McGeary explained. By allowing students to see one another’s contrasting views graphically, they can then discuss among themselves to find the real answer.

Using clickers enabled McGeary to facilitate a more interactive discussion in such a large course. It occurred to McGeary that her spring students were more mentally invested when a typical demonstration she gives every year was received with much more enthusiasm than usual.

“Every year I do a demonstration to show the release of energy when rocks break, resulting in an earthquake. This time, instead of people politely clapping or laughing, they actually cheered!” McGeary said enthusiastically. “It was exciting.” 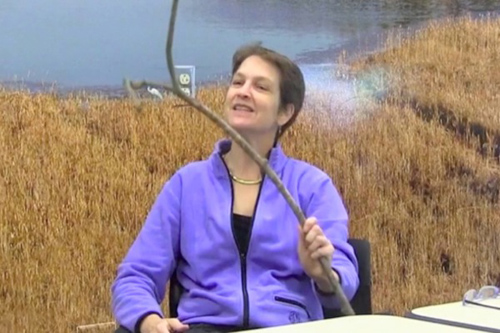 UD Capture proved to be another useful tool, particularly for the 40-50 athletes in her class who would have to miss lectures on occasion for sporting events. “Instead of them worrying about what they missed or asking their friends for notes, they can just watch the video.”

Rather than canceling class in when she would be absent, McGeary filmed the lecture ahead of time using UD Capture so that the students did not fall behind in the lesson plan. “You can actually record extra lecture clips, so I was able to put together a couple of 10 minute clips to cover things that I would not have time to go over in class,” she said.

At first, McGeary was skeptical about UD Capture, fearing that students would be more likely to skip class, but she was pleasantly surprised in the spring when attendance actually improved compared to previous semesters. “I would say that this spring I had the best attendance that I’ve ever had. I think it was a combination of the clicker and UD Capture. My biggest fear didn’t happen!”