Teaching Science to The Religious? Focus on How Theories Develop

Brown biology Professor Ken Miller understands that most students are religious. He is too. The way to teach science to religious students is to show how scientific ideas come to be, he says. Students can learn that religious people engage in scientific explorations of nature, and that theories are based on observation and logic, not some anti-religious agenda.

Vicious, winner-take-all competition in nature is an essential pillar of evolutionary theory, but it frequently describes the mindset people have about how, or whether, to teach the subject. Religious students sometimes come to class thinking that science and religion are in deliberate opposition, like two lionesses fighting over a kill. When Brown University biologist and practicing Catholic Kenneth Miller teaches evolution, he also teaches that such a zero-sum mindset just isn’t warranted.

“I think it’s really unnecessary,” Miller said. “What’s extremely unfortunate right now is that, not just evolution, but whole areas of science have been sucked into the culture wars argument and it’s been taken for granted, therefore, that science takes a particular position in the left-right spectrum.” 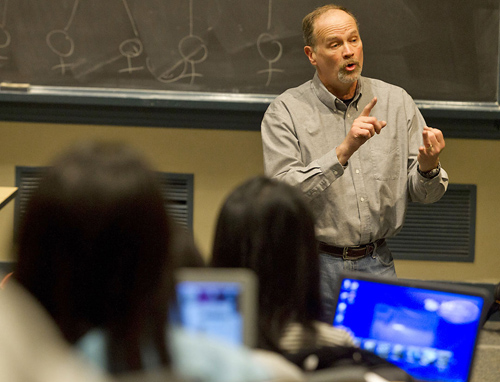 ‘Believe’ in evolution? “To me the word ‘believe’ means to accept something beyond question,” says Ken Miller. “In science there are no facts or theories that are beyond question.” Image credit: Mike Cohea/Brown University

Because Miller is a leading textbook author and a frequent contributor to the public discourse, he takes flak from partisans on both sides who disagree about evolution but share the view that religion and science are intellectually incompatible. In the classroom, however, Miller and thousands of other educators are still left with a more pragmatic challenge. Evolution will be taught to millions of students who are religious — 75 percent, according to a recent Pew survey of college students. At the AAAS conference on Saturday, Feb. 18, 2012, at 1 p.m., Miller will speak about how he teaches science to religious students.

Miller’s basic approach is to help students trace the development of a scientific theory, rather than to present it as some kind of finished doctrine that must be believed because it has evidentiary support.

“I don’t ask students to believe in education because I don’t ask them to believe in DNA either,” Miller said. “To me the word ‘believe’ means to accept something beyond question. In science there are no facts or theories that are beyond question. What I do urge students to do is to learn about the evidence and understand why the scientific community finds it persuasive.” 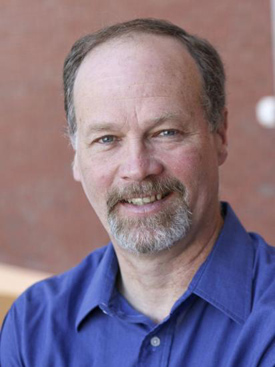 Kenneth R. Miller: “... whole areas of science have been sucked into the culture wars argument and it’s been taken for granted, therefore, that science takes a particular position in the left-right spectrum.” Image credit: Brown University

Explaining science, such as evolution, as a process can help religious students accept science in two ways, Miller said. First of all, it’s often important to point out that religious people have long been instrumental in driving the scientific process. A scientist’s goal is to better understand the natural world, not to destroy religious faith, Miller said. History is replete with examples of religious people who carried out the goal of exploring nature in entirely scientific ways — from Copernicus, to Mendel, to Francis Collins.

“The birth of the scientific revolution was in large measure funded by the church because early universities, early scientific investigations, almost universally were done by individuals who thought that exploring nature was a way of praising God,” Miller said. “It was and is philosophically consistent to be a person of faith and also a scientist.”

Secondly, when science is presented as a rational process, rather than as doctrine to be accepted, students can consider its logic and its evidentiary support, before feeling pressure to reconcile the complete idea’s philosophical implications.

Darwin himself laid out the theory of evolution in The Origin of Species this way. Before he presents the bottom line, his first four chapters offer the series of observations about species diversity and the struggle to survive that led him to the theory.

“The best way to approach deeply religious students on a scientific issue is to develop the scientific background, to show that science doesn’t grow out of some sort of anti-theological or political perspective, but out of a very human drive to understand ourselves and the world around us,” Miller said. “They see that it is not an a priori cultural and social conclusion for which you are trying to find a justification but rather the logical outcome of being curious about nature and trying to find out how it works.”

There is good news about how effective evolution education can be in the research of Roger Williams University Professor Avelina Espinosa. She’s found that whether students are religious or not, politically conservative or liberal, their acceptance of evolution increases the more science classes they take, Miller said. That doesn’t mean that all religious students come to accept the theory, though.

Early in his teaching career at Brown, Miller delivered a biology lecture to his class on Ash Wednesday — this year it’s Feb. 22 — and then headed off to Brown’s Manning Chapel to pray. On his way out of services he ran into one of his students, who looked amazed to see the evolutionist lecturer emerge with ash on his forehead.

He recalled, “She waited for me and came up to me and said, ‘Hi, Professor Miller, what are you doing here?’ My answer was ‘I’m doing the same thing you are.’ And she said, ‘But, you can’t. I’ll give you a book tomorrow that explains why no person who accepts evolution can possibly be a person of faith.’

The student brought the book and the two met and talked, but never came to a philosophical agreement. Mindsets are not easy to change, but teaching methods can create the right conditions for reasonableness to evolve.

“There are ways to reach religiously oriented students with respect to science,” Miller said.