Taking the measure of monsoons — from New Haven

From his meteorological lair on Science Hill, Boos calmly monitors fluid dynamics and atmospheric depressions thousands of miles away. Volatile forces of nature in far-off places are his specialty.

“In many parts of the world, people don’t have access to the quality of weather forecasts we’re used to in the U.S.,” said Boos, an assistant professor in the Department of Geology and Geophysics, and the guiding force behind a new website, WorldMonsoons.com. “Those forecasts either aren’t being done or they’re not being disseminated in a fashion that can be appreciated by the average citizen.”

The consequences can be dramatic. Monsoons in the world’s tropical latitudes are atmospheric circulations the size of continents, producing months-long periods of rain that wash away crops and endanger public safety. Advance notice of their arrival and duration has the potential to save lives and help farmers decide the best time for planting. 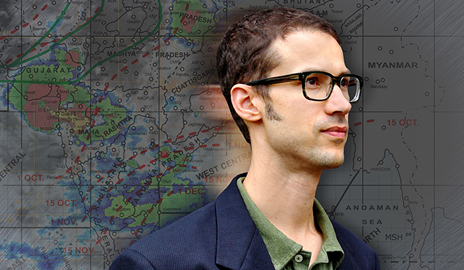 Just a month ago, torrential rains in Kashmir killed more than 200 people; in 2010, monsoons left 20% of Pakistan underwater. These rains were the result of a monsoon depression — a vortex embedded within the continental-scale monsoon circulation. Although monsoon depressions are weaker than hurricanes, they are larger in size, and they don’t lose strength as they pass over land.

“Working on a problem that’s so relevant to billions of people is very meaningful to me,” said Boos, who is part of the Yale Climate & Energy Institute. “It’s also scientifically interesting. There is so much we’re learning.”

Boos relies on a combination of satellite data, observation and high resolution computer simulations of atmospheric conditions in order to theorize about monsoon dynamics. At present, there is no accepted theory to account for the observed variability of monsoons.

Boos noted that weather forecasts for tropical areas hinge on rainfall, not temperature. These areas are not subject to the constant battles of high and low pressure systems so characteristic of weather in the United States. As a result, rainy episodes in the tropics can last 30-60 days.

On his monsoon website, Boos offers rainfall probability information on a global scale, as well as specific forecasting for cities such as Kolkata (the former Calcutta), Kumbo (in Cameroon) and Puerto Vallarta. He added New Haven, for good measure.

Boos said he considered the site a work in progress. It began as the educational component of a National Science Foundation grant devoted to the study of monsoons. Besides the forecasting information, the site also links to a monsoon blog, written by Boos.

“Bill’s passion for this project really comes through,” said Pam Patterson, a senior academic technologist in Yale’s Instructional Technology Group. Patterson advised Boos as he developed the website. “Here is a man who is foremost in his field, gathering data, translating it into visual form and delivering it to the rest of the world.”

Boos stressed that he is not attempting to become the world’s emergency monsoon warning system. He merely wants to share his data with the people who are most affected by it.

“My hope is that it gives young people a better sense of what monsoons are — and that people in the tropics start to use it,” he said.