How Yale’s newest graduates make their imprint on the world and on history will be determined by how well they handle fear and inspire faith, Oscar-winning actor Tom Hanks told the seniors in his Class Day address on May 22.

In the ceremony on the Old Campus, Hanks urged the soon-to-be graduates to begin their future by coming to the aid of the U.S. veterans of the Iran and Afghan wars, whose “faith in themselves is shadowed by the fear of not knowing what is expected of them next,” he said.

The approximately 1,250 Yale College seniors and their guests listened to Hanks’ address on a cool and cloudy afternoon. The ceremony also celebrated the achievements of the graduates and the history of the Class of 2011. In keeping with a Class Day tradition, the seniors were garbed in hats or headpieces of every type, many of their own creation.

Wearing a Yale baseball cap, Hanks characterized the class’ era as one in which electronic devices allow them to be plugged in at all times, and told its members that there are both upsides and downsides to all of the technology at their disposal. 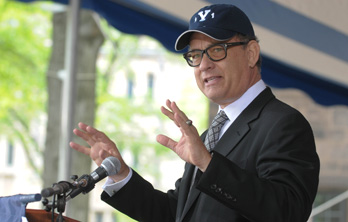 One advantage, he commented, is that “boredom is vanquished” because there is always something to do, ranging from checking e-mail, text messaging, sending “tweets” on Twitter or keeping up with each other on Facebook. However, he said, current technology also causes “perpetual distraction” as well as a “surplus of celebrities” as a result of people — both the unknown and the famous — becoming YouTube viral sensations or because of how easily their misdeeds are captured on cell phones and posted online for all the world to see.

“Fear has become the commodity that sells as certainly as sex,” Hanks told the seniors. “Fear is cheap, fear is easy, fear gets attention…. It’s fast, it’s gossip and it’s just as glamorous, juicy and profitable. Fear twists facts into fictions that become indistinguishable from ignorance.”

He cited as an example a teaser for a television news story about bacteria-infected meat that misled viewers with the question: “Are our schools poisoning our children?” He also began his speech joking about the fact that everyone was assembled for Yale Class Day festivities despite the much-publicized prediction of one religious group that the world would come to an end on May 21.

Hanks — who won Academy Awards for his roles in “Philadelphia” and “Forest Gump” and whose credits also include “Saving Private Ryan,” “Apollo 13,” “Big” and the voice of Woody in “Toy Story” — told the seniors that he has a passion for history because of the lessons it teaches. He quoted American naval commander John Paul Jones: “If fear is cultivated, it will become stronger. If faith is cultivated, it will achieve mastery.”

“Fear or faith — which will be our master?” Hanks asked the seniors.

“Throughout our nation’s constant struggle to create a more perfect union, establish justice and ensure our domestic tranquility, we battle fear from outside our borders and within our own hearts every day of our history,” Hanks commented. “Our nation came to be despite the fear of retribution from the king across the sea. America was made strong because people could live free from the fears that made up their daily lives in whatever land they called the ‘Old Country.’ Our history books tell of conflicts taken up to free people from fear — those kept in slavery — in our own states, and to liberate whole nations under the rule of tyrants and theologies rooted in fear. …

“But we live in a world where too many of us are too ready to believe in things that do not exist,” Hanks continued. “Conspiracies abound. Divisions are constructed and the differences between us are not celebrated for making us stronger but are calculated and programmed to set us against each other.”

Hanks told the seniors that they will make choices between fear and faith every day of their lives. He urged them to “take the fears [of U.S veterans] head on” for at least four years — the same amount of time they’ve been at Yale.

“Whatever your opinion of the wars, you can imprint the very next pages of the history of our troubled world by reinforcing faith in those returning veterans,” Hanks told the seniors. “Allowing them rest, aiding in their recovery … empathizing with the new journey they are starting even though we will never fully understand the journey they just completed, even though we will never understand what they endured. We will all define the true nature of our American identity not by the parades and the welcome-home parties, but how we match their service with service of our own.”

The soon-to-be graduates’ new “career,” Hanks said, is a permanent one: “To stand on the fulcrum between fear and faith — fear at your back, faith in front of you.

“Which way will you move? Move forward, move ever forward,” he encouraged them, “and tweet out a picture of the results.”

The ceremony also included a welcome from Catherine Lew; a Class Reflection on “What Yale Teaches” by Riley Scripps Ford; a Class Insight by Eric Randall; and a Class History, portrayed on video and titled “Life After Yale: A Guide to Graduation for the Class of 2011.” In keeping with a Class Day tradition, Courtney Pannell and Victor Zapana planted ivy and dedicated a stone with the engraving “Class of 2011.” The seniors and guests also joined in a moment of silence in honor of five members of the Class of 2011 who had died: Cameron Dabaghi, Michele Dufault, Scott Robinson, Mandi Schwartz and Daniel Siegel.

Following another longstanding Yale tradition, the seniors joined voices for the singing of “Bright College Years” and smiled and cheered as they waved white handkerchiefs (see a video about Class Day traditions here). In her recitation of the Ivy Ode, an original poem she wrote titled “Preparing to Leave,” senior Eliza Gonzalez captured the poignancy of both her arrival and her departure from Yale. Her poem recounts the emotion-filled decisions about what to take and what to leave behind as she packed. Her ode reads, in part:

“And at night I dreamed that I drove a wagon
down the streets of this city, and I told the no-ones
of my dream that when we got where we were going
we would build a new house
out of all the trees we would cut down
and furnish it with all the things I owned,
which is to say, all the things I remembered loving here.”