Such highly coveted technical capabilities as the observation of single catalytic processes in nanoreactors, or the optical detection of low concentrations of biochemical agents and gases are an important step closer to fruition. Researchers with the U.S. Department of Energy (DOE)’s Lawrence Berkeley National Laboratory (Berkeley Lab), in collaboration with researchers at the University of Stuttgart in Germany, report the first experimental demonstration of antenna-enhanced gas sensing at the single particle level. By placing a palladium nanoparticle on the focusing tip of a gold nanoantenna, they were able to clearly detect changes in the palladium’s optical properties upon exposure to hydrogen.

“We have demonstrated resonant antenna-enhanced single-particle hydrogen sensing in the visible region and presented a fabrication approach to the positioning of a single palladium nanoparticle in the nanofocus of a gold nanoantenna,” says Paul Alivisatos, Berkeley Lab’s director and the leader of this research. “Our concept provides a general blueprint for amplifying plasmonic sensing signals at the single-particle level and should pave the road for the optical observation of chemical reactions and catalytic activities in nanoreactors, and for local biosensing.”

Alivisatos, who is also the Larry and Diane Bock Professor of Nanotechnology at the University of California, Berkeley, is the corresponding author of a paper in the journal Nature Materials describing this research. The paper is titled “Nanoantenna-enhanced gas sensing in a single tailored nanofocus.” Co-authoring the paper with Alivisatos were Laura Na Liu, Ming Tang, Mario Hentschel and Harald Giessen. 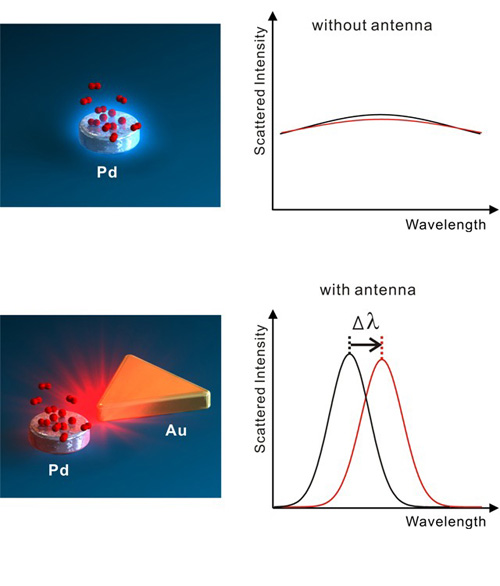 One of the hottest new fields in technology today is plasmonics – the confinement of electromagnetic waves in  dimensions smaller than half-the-wavelength of the incident photons in free space. Typically this is done at the interface between metallic nanostructures, usually gold, and a dielectric, usually air. The confinement of the electromagnetic waves in these metallic nanostructures generates electronic surface waves called “plasmons.” A matching of the oscillation frequency between plasmons and the incident electromagnetic waves gives rise to a phenomenon known as localized surface plasmon resonance (LSPR), which can concentrate the electromagnetic field into a volume less than a few hundred cubic nanometers. Any object brought into this locally confined field – referred to as the nanofocus – will influence the LSPR in a manner that can be detected via dark-field microscopy.

“Nanofocusing has immediate implications for plasmonic sensing,” says Laura Na Liu, lead author of the Nature Materials paper who was at the time the work was done a member of Alivisatos’ research group but is now with Rice University. “Metallic nanostructures with sharp corners and edges that form a pointed tip are especially favorable for plasmonic sensing because the field strengths of the electromagnetic waves are so strongly enhanced over such an extremely small sensing volume.” 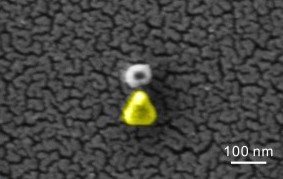 Plasmonic sensing is especially promising for the detection of flammable gases such as hydrogen, where the use of sensors that require electrical measurements pose safety issues because of the potential threat from sparking. Hydrogen, for example, can ignite or explode in concentrations of only four-percent. Palladium was seen as a prime candidate for the plasmonic sensing of hydrogen  because it readily and rapidly absorbs hydrogen that alters its electrical and dielectric properties. However, the LSPRs of palladium nanoparticles yield broad spectral profiles that make detecting changes extremely difficult.

“In our resonant antenna-enhanced scheme, we use double electron-beam lithography in combination with a double lift-off procedure to precisely position a single palladium nanoparticle in the nanofocus of a gold nanoantenna,” Liu says. “The strongly enhanced gold-particle plasmon near-fields can sense the change in the dielectric function of the proximal palladium nanoparticle as it absorbs or releases hydrogen. Light scattered by the system is collected by a dark-field microscope with attached spectrometer and the LSPR change is read out in real time.” 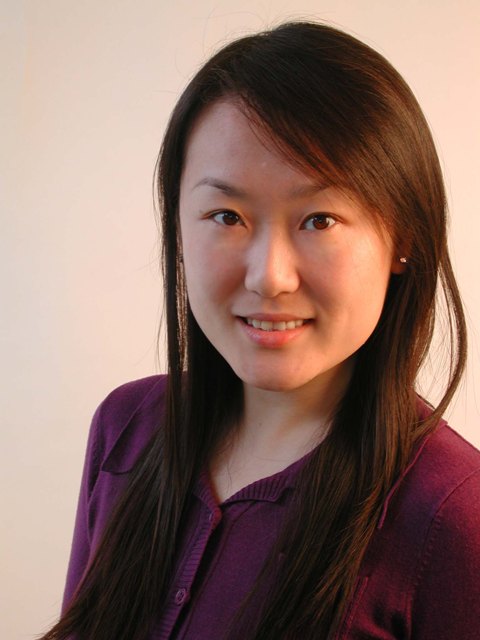 “By amplifying sensing signals at the single-particle level, we eliminate the statistical and average characteristics inherent to ensemble measurements,” Liu says. “Moreover, our antenna-enhanced plasmonic sensing technique comprises a noninvasive scheme that is biocompatible and can be used in aqueous environments, making it applicable to a variety of physical and biochemical materials.”

For example, by replacing the palladium nanoparticle with other nanocatalysts, such as ruthenium, platinum, or magnesium, Liu says their antenna-enhanced plasmonic sensing scheme can be used to monitor the presence of numerous other important gases in addition to hydrogen, including carbon dioxide and the nitrous oxides. This technique also offers a promising plasmonic sensing alternative to the fluorescent detection of catalysis, which depends upon the challenging task of finding appropriate fluorophores. Antenna-enhanced plasmonic sensing also holds potential for the observation of single chemical or biological events.

“We believe our antenna-enhanced sensing technique can serve as a bridge between plasmonics and biochemistry,” Liu says. “Plasmonic sensing offers a unique tool for optically probing biochemical processes that are optically inactive in nature. In addition, since plasmonic nanostructures made from gold or silver do not bleach or blink, they allow for continuous observation, an essential capability for in-situ monitoring of biochemical behavior.”

This research was supported by the DOE Office of Science and the German ministry of research.