The University of Delaware is fighting the Parkinson’s disease with tai chi.

People with the nervous system disorder struggle with substantially impaired balance. Along with other benefits, balance is something that the Chinese martial art is very adept at improving.

So the Parkinson’s Clinic at the University of Delaware Nurse Managed Primary Care Center pushed aside the chairs in a Science, Technology and Advanced Research (STAR) Campus conference room and turned it into a makeshift martial arts studio.

The class just finished its inaugural run under instructor Russ Mason, a retired UD professor who spent the majority of his Blue Hen days in the English Language Institute.

The veteran martial artist started teaching himself tai chi from a library book in the mid-1960s. He’s made many trips to China and all over the world to study under top teachers.

Mason’s mother-in-law was diagnosed with Parkinson’s. As he watched her struggle with the progression of the illness, he pondered on how his beloved martial art could benefit those afflicted with the disease.

“I thought, ‘Tai chi is so wonderful for health, balance and mobility.’ I was curious about its practicality for Parkinson’s,” Mason said, “so last spring, I attended a lecture where the co-founder of the Michael J. Fox Foundation [Deborah Brooks] spoke at UD.” 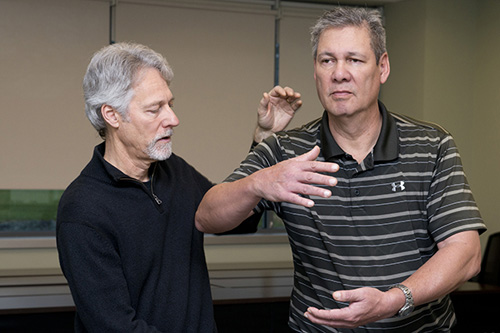 Russ Mason works on form with Scott DeBoda in a tai chi program designed for those with Parkinson’s disease. Photo credit: University of Delaware

Mason raised his hand to ask a question and, by chance, the person who handed him the microphone was Ingrid Pretzer-Aboff, associate professor in the School of Nursing and founder of the Parkinson’s Clinic. Well-versed on research on tai chi and Parkinson’s disease, she soon struck up a conversation with Mason about doing a class at the STAR Campus.

“We preach the need to exercise to all our Parkinson’s patients,” said Pretzer-Aboff. “Tai chi is wonderful for balance, confidence, function, walking and decreasing falls.”

So Mason started teaching a class during the fall semester in a four-month beta trial. Class participants saw immediate benefits.

“You can pretty much feel the benefits right away. In addition to improving balance, the mental relaxation [that Russ teaches] is so helpful,” says class participant Scott DeBoda, who noted that he is also hitting the golf ball better upon taking the class.

The form of tai chi that Mason teaches to the Parkinson’s patients is a short, simple method called Tai Chi Fundamentals. The model is developmentally staged so that people learn basic balance principles, including how to turn on a weighted hip and how to take a balanced step — all important skills for someone with Parkinson’s.

“I feel my balance getting better,” said participant Tom McDowell, an 85-year-old Newark man who’s taken part in several studies at UD. “I had been starting to take smaller steps. Since I started the tai chi class, I’m able to take a longer step again.”

McDowell’s wife, Nancy Coning, who takes the class alongside him, says that with tai chi, Tom will make it to 110 years old.

“I’m not going to last that long,” she joked.

With the success of the introductory lessons, plans are underway to offer another tai chi class starting in the spring.

Those who are interested in tai chi or other offerings from the Parkinson’s Clinic can contact Pretzer-Aboff at iaboff@udel.edu.