A new system developed by UCLA researchers could make it easier and less expensive to diagnose chronic diseases, particularly in remote areas without expensive lab equipment.

The technology uses extremely simple optical hardware and a lens-free microscope, as well as sophisticated algorithms that help reconstruct the images of tissue samples. It could make much-needed diagnostic testing available and affordable for people in developing countries and remote areas that lack the expensive lab equipment currently used to perform tissue biopsies.

The system for making biological samples transparent, also known as “tissue clearing,” and then imaging them using a lens-free microscope is described in an article published today in Science Advances, a journal of the American Association for the Advancement of Science. It was developed by a team led by Aydogan Ozcan, the UCLA Chancellor’s Professor of Electrical and Computer Engineering and Bioengineering and associate director of the California NanoSystems Institute; and Rajan Kulkarni, an assistant professor of medicine and dermatology at the David Geffen School of Medicine at UCLA, and a member of CNSI. 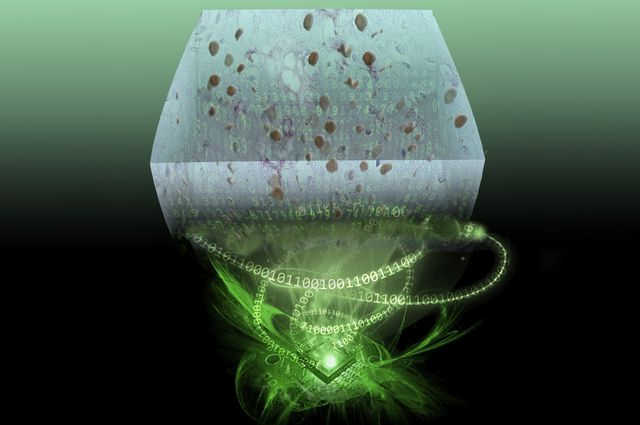 Tissue biopsy is widely considered the gold standard for detecting diseases like cancer and inflammatory conditions. But the test is relatively expensive and complex, and it requires the use of sophisticated facilities — a serious challenge in regions with limited resources.

In a standard biopsy, tissue is cut into thin slices, around one-tenth of the thickness of a human hair and stained with dyes, so that medical professonals can use a microscope to detect abnormalities and diseased cells. One challenge of that approach — beyond the time and cost involved — is that only a small number of tissue samples can be analyzed at a time.

“Although technological advances have allowed physicians to remotely access medical data to perform diagnoses, there is still an urgent need for a reliable, inexpensive means for disease imaging and identification — particularly in low-resource settings — for pathology, biomedical research and related applications,” Ozcan said.

The researchers prepared tissue samples using a technique called Clarity, which makes tissue transparent, or “clears” it, using a chemical process that removes fat and leaves behind proteins and DNA. The method typically requires fluorescent dyes, which can be costly, to stain the tissue samples, but one drawback of those dyes is that the staining tends to degrade over time, making it harder for scientists to gather information from it.

Instead, the UCLA researchers used colored, light-absorbing dyes which, according to Kulkarni, can be used with regular microscopy tools without any noticeable signal loss over time.

And instead of utilizing a machine that’s typically used for biopsy testing (a traditional microscope can cost more than $50,000), the UCLA scientists developed a new device made of components that collectively cost just a few hundred dollars: a holographic lens-free microscope that’s capable of producing 3-D pictures with one-tenth the image data that conventional scanning optical microscopes need to do the same thing.

The UCLA method also allowed the scientists to use tissue samples that were 0.2 millimeters thick, more than 20 times thicker than a typical sample — a critical benefit of the new system because producing thinner tissue slices is difficult without sophisticated equipment. This also enables scientists to study a larger sample volume, which could help them to detect abnormalities earlier than they otherwise would.

Here’s how the test works: First, the cleared tissue is placed in a small container on a silicon chip that contains millions of photo detectors — the same type of chip that’s found in mobile phone cameras. When light is shined on the tissue sample, low-resolution shadows from the tissue sample fall on the chip. Those shadows, created by the interference of light scattered by the sample, form holograms of the tissue sample.

Next, the researchers enhance the resolution and enable 3-D imaging by shifting the sample relative to the image sensor and capturing the same holographic shadow, allowing them to digitally view different cross-sections, or digital slices, of the tissue sample.

“Through computation and algorithms, we converted a standard 10-megapixel imager, like those commonly used in mobile phones, into a  few-hundred-megapixel microscope that can digitally image through different slices of a thick tissue sample,” said Yibo Zhang, the study’s first author and a graduate student in Ozcan’s lab.

Other members of the research team were Sam Yang, Hongda Wang, Da Teng and Yair Rivenson, all of the Ozcan Research Group; and Yoonjung Shun, Kevin Sung and Harrison Chen of Kulkarni’s lab.

Ozcan’s work is supported by the Presidential Early Career Award for Scientists and Engineers, the Army Research Office, the National Science Foundation, the Office of Naval Research, the National Institutes of Health, the Howard Hughes Medical Institute, the Vodafone Americas Foundation and the Mary Kay Foundation. Kulkarni’s work is supported by the UCLA Clinical and Translational Sciences Institute.