More than a century ago, an estimated 180,000 female Atlantic sturgeon arrived from the coast in the spring to spawn in the Delaware River and fishermen sought their caviar as a lucrative export to Europe. Overfishing contributed to steep population declines, however, and today numbers have dwindled to fewer than 300 adults.

Researchers at the University of Delaware and Delaware State University are using satellites, acoustic transmitters, an underwater robot and historical records to pinpoint the ocean conditions that the fish prefer during migrations — and potentially help fishermen avoid spots where they might unintentionally catch this endangered species.

“There are specific, observable waters in the ocean that we hypothesize are more associated with this species,” said Matthew Oliver, assistant professor of oceanography in UD’s College of Earth, Ocean, and Environment. 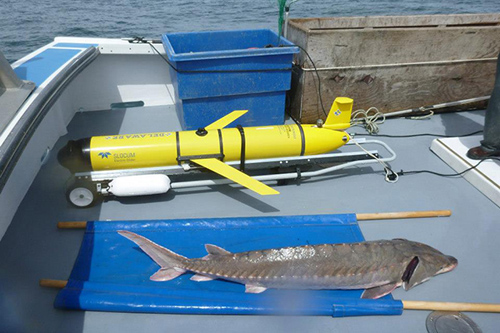 The OTIS glider waiting on deck while an Atlantic sturgeon gets tagged and released. Photos by Matt Breece, Kevin Wark and Doug White. Activities authorized under NMFS Permit No. 16507-01.

Oliver and graduate student Matt Breece compared prior years’ satellite data on ocean temperature and chlorophyll levels with locations where sturgeon were previously tracked migrating along the Mid-Atlantic coast. Based on patterns they found between the datasets, they are now using current satellite information to make rough daily predictions on where the sturgeon are migrating.

They are testing their predictions by directing a torpedo-shaped robot, called an oceanographic telemetry identification sensor (OTIS) glider, to those locations to check whether sturgeon are indeed there. Three weeks into the experiment, they have already detected 10.

The UD researchers are working with Delaware State’s Dewayne Fox, who has tagged hundreds of Atlantic sturgeon with transmitters to track where they go. The tags set off alerts when the fish pass by a set array of receivers in Delaware Bay, and the glider expands that range by also picking up on the tags.

The device is on a three-month mission to find sturgeon based on the researchers’ predictions, controlled remotely on where to go from Oliver’s lab at the Hugh R. Sharp Campus in Lewes. The device can collect additional ocean data below the surface, including salinity, dissolved oxygen levels, chlorophyll and ocean currents.

“We’re actually flying through these different water types, testing the hypothesis objectively to see if this is actually an association between sturgeon and satellite observations,” Oliver said. 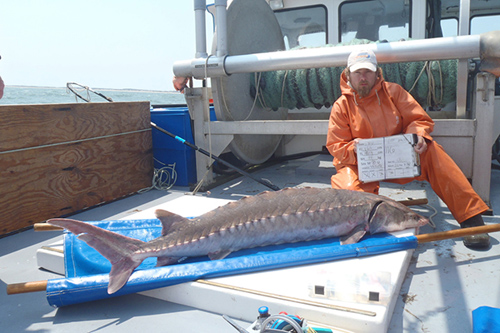 They found their first sturgeon near Chincoteague on April 17, a 93-pound fish that had been tagged in 2010, and have since located nine more.

The approach could help reduce interactions with the endangered sturgeon by informing local fishermen of their probability of encountering sturgeon. The idea is that if a pocket of preferred water conditions moves, the sturgeon moves with it.

“These things move around all the time,” Oliver said. “That’s the hard part of resource management in the ocean.” 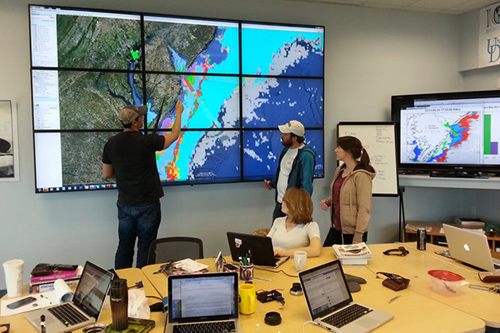 The lab has done similar work on sand tiger sharks, last fall detecting 23 sand tigers and showing that in-water measurements made by OTIS are predictors of shark locations.

The last two autumns have shown that there is a possibility that Atlantic sturgeon and sand tiger sharks may be showing some habitat association as they migrate. The current experiment helps test that idea.

In the future, Oliver would like to try having multiple gliders in the water to search for sturgeon at various sites simultaneously. The additional information would confirm if findings are representative of a broader area or not. In the meantime, the experiment is in its early stages.

“It’s very much exploratory at this point,” Oliver said.

Progress on the mission, along with pictures of sturgeon detected by OTIS are available on the Oliver Lab Facebook page.