How some leaves got fat: It’s the veins

Some plants, such as succulents, have managed to grow very plump leaves. For that to happen, according to a new study in Current Biology, plants had to evolve 3-D arrangements of their leaf veins in order to maintain adequately efficient hydraulics for photosynthesis.

PROVIDENCE, R.I. [Brown University] — A garden variety leaf is a broad, flat structure, but if the garden happens to be somewhere arid, it probably includes succulent plants with plump leaves full of precious water. Fat leaves did not emerge in the plant world easily. A new Brown University study published in Current Biology reports that to sustain efficient photosynthesis, they required a fundamental remodeling of leaf vein structure: the addition of a third dimension.

Leaves, after all, are food factories complete with plumbing to transport water and sugar. The farther those veins are from cells performing photosynthesis, the less efficient the process will be. Researchers Erika Edwards, assistant professor of biology at Brown, and former graduate student Matt Ogburn, wondered how plants managed to evolve fat leaves, given the hydraulic challenges of gaining girth.

Of all plants, Edwards said, succulents could sustain photosynthesis in fat leaves with sparse venation because they store so much water right where it’s needed. But she and Ogburn found that even succulents were constrained by 2-D veins. 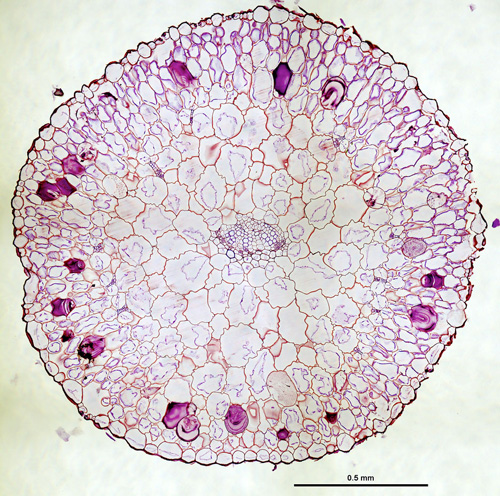 Ring of veins. Veins, internal to the dark purple-stained mucilage deposits of this cross-section of a succulent Phemeranthus teretifolius leaf, are arranged in a ring shape that reduces the distance between veins and photosynthetic cells. Image credit: Matt Ogburn

“There must be some kind of a tradeoff in a fat leaf that’s really different from most flat leaves,” said lead author Ogburn, now a postdoctoral fellow at Yale. “There’s a benefit to that in storing water in the leaf, but it’s going to have a cost to it in terms of the other things the leaf has to do.”

To do their study, Ogburn and Edwards looked deeply into the catalog of two dry-climate plant groups, Portulacineae and Molluginaceae. They pieced together their evolutionary history, measured the water storage of 83 species, and the vein structure of 42.

Up to a certain level of thickness, leaves retained the planar vein structure of flat leaves. As a consequence, their vein structure was sparser and path lengths were longer — but only up to a point. The researchers discovered that after a certain threshold of thickness, vein structure had evolved to become 3-D, abandoning the single plane layout of flatter leaves for either an oval or circular orientation in cross-section.

That 3-D vein structures could independently evolve more than 10 times, in two ways, in this limited sample of two lineages suggests that the different vein structure is no coincidence, Ogburn and Edwards said. Instead it seems conclusively to be a functional trait that emerged to allow leaves to become thicker.

“If you had just a 2-D-veined pile of species and a 3-D-veined pile of species and you didn’t know how they were related to each other, you might say, maybe 3-D venation just evolved once a long time ago and had absolutely nothing to do with succulence,” Edwards said. “But when you can lay them out on a phylogeny and reconstruct how many times this transition happened — the more times you see this repeated correlation between these two traits the more power you have to say that this is actually adaptive.” 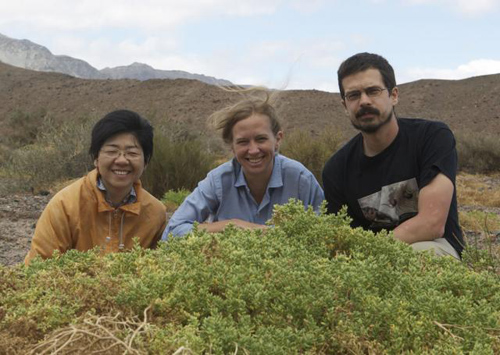 The researchers wrote that 2-D arrangements of veins, because they produce a low density of veins in thicker leaves, likely imposed a hard limit on leaf thickness. Evolution of 3-D veins allowed them to burst through those constraints.

“Increased leaf thickness [when veins are planar] negates the hydraulic benefits of dense leaf venation,” Edwards and Ogburn wrote in Current Biology. “It also predicts an upper limit to leaf thickness that would be set by the minimal functional vein density. … However, the repeated evolution of 3-D venation allowed for further increases in succulence while maintaining moderate hydraulic path lengths.”

In other words, leaves became free to be fat, in an evolutionary vein.

The National Science Foundation supported the research with grant DEB-1026611.