In a new study in Neuron, scientists identified specific key steps in the chain of events that causes stress-related drug relapse. They identified the exact region of the brain where the events take place in rat models and showed that by blocking a step, they could prevent stress-related relapse.

PROVIDENCE, R.I. [Brown University] — All too often, stress turns addiction recovery into relapse, but years of basic brain research have provided scientists with insight that might allow them develop a medicine to help. A new study in the journal Neuron pinpoints the neural basis for stress-related relapse in rat models to an unprecedented degree. The advance could accelerate progress toward a medicine that prevents stress from undermining addiction recovery. 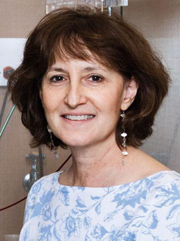 Julie Kauer. “We’re at the point of coming to understand the processes (of stress-related drug relapse) and possible therapeutic targets. Remarkably, this has worked.” Image credit: Brown University

In the paper published March 6, researchers at Brown University and the University of Pennsylvania demonstrated specific steps in the sequence of neural events underlying stress-related drug relapse and showed that they take place within a brain region called the ventral tegmental area (VTA), which helps reinforce behaviors related to fulfilling basic needs. They also showed that a closely related neural process believed to be crucial to stress-related relapse may not be involved after all.

Moreover, this new understanding allowed the researchers to prevent relapse to drug seeking in the animal model. When they treated rats that had recovered from cocaine addiction with a chemical that blocks the “kappa opioid receptors” that stress activates in the VTA, the rats did not relapse to cocaine use under stress. Untreated rats who had also recovered from addiction did relapse after the same stress.

The chemical that helped the rats, “nor-BNI,” may be one that would someday be tried in humans, said study senior author Julie Kauer, professor of biology in Brown’s Department of Molecular Pharmacology, Physiology, and Biotechnology. By deepening scientists’ understanding of the stress-related relapse mechanism, she and her co-authors hope to identify multiple possible targets for eventual patient treatments.

“If we understand how kappa opioid receptor antagonists are interfering with the reinstatement of drug seeking we can target that process,” Kauer said. “We’re at the point of coming to understand the processes and possible therapeutic targets. Remarkably, this has worked.”

The neural crux of relapse

Exactly how stress acts in the brain to trigger relapse is a complicated sequence that is still not fully understood, but the new study focuses on and elucidates three key players at the crux of the phenomenon in the VTA: GABA-releasing neurons, dopamine-releasing neurons, and the kappa opioid receptors that affect their connections.

Fulfilling natural needs such as hunger or thirst results in a rewarding release of dopamine from the VTA’s dopamine neurons, Kauer said. Unfortunately, so does using drugs of abuse.

In normal brain function, GABA applies the brakes on the rewarding dopamine release, slowing it back to a normal level. It achieves this by forging and then strengthening the connections, called synapses, with the dopamine neuron. The strengthening process is called long-term potentiation (LTP).

In the first of their experiments, the team at Brown, including lead author Nicholas Graziane, showed that stress interrupts the LTP process, hindering GABA’s ability to slam the brakes on dopamine release.

Previous research implicated kappa opioid receptors as one of many neural entities that could have a role in stress-related relapse. Kauer, Graziane, and co-author Abigail Polter investigated that directly by blocking the receptors in some rats with a treatment of nor-BNI in the VTA and leaving others untreated. Then they subjected the rats to a standardized five-minute stress exercise. After 24 hours they looked at the cells in the VTA and found that LTP was hindered in the untreated rats but still present and underway in the rats whose receptors had been blocked with nor-BNI.

With the role of stress and the receptors in the GABA-dopamine dynamic both confirmed and then mitigated, the question remained: Could this knowledge be used to prevent relapse?

To answer that, Penn co-authors Lisa Briand and Christopher Pierce performed the experiment demonstrating that nor-BNI delivered directly to the VTA prevented stressed rats from relapsing to cocaine seeking, while untreated rats subjected to the same stress did relapse.

“Our results indicate that the kappa receptors within the VTA critically control stress-induced drug seeking in animals,” the authors wrote in Neuron.

Along the way, the team also discovered evidence that another stress-affected synapse in the VTA – one that excites dopamine release rather than inhibits it – does not play a role in the stress-related relapse as many researchers have thought. The nor-BNI treatment that prevented stress-related relapse, for example, did not affect those synapses.

Kauer emphasized that her lab’s findings of therapeutic potential are the product of more than a decade of essential basic research on the importance of how changes in synapses relate to behaviors including addiction.

“If we can figure out how not only stress, but the whole system works, then we’ll potentially have a way to tune it down in a person who needs that,” she said.