“WaterWatchers,” a new mobile app, harnesses the power of crowdsourcing

The free app, which is currently available for Android and available for download at www.ibmwaterwatchers.co.za, and the SMS capability* together provide an easy way for anyone to collect and report issues on local waterways and pipes to a centralized portal. After taking a photo and answering three simple questions about the particular water canal or pipe, the data is uploaded in real-time to a central database. After 30 days, the data will be analyzed and aggregated into a meaningful “leak hot spot” map for South Africa.

“This project is about analyzing use, predicting demand and managing the future of our country’s water,” said IBM South Africa Smarter Planet Executive Ahmed Simjee. It’s a unique exercise in crowdsourcing for South Africa and we encourage every person to become a ‘citizen scientist’- to engage with the environment and help create a big picture map  of our water leaks and issues. By enabling countless individuals to gather and submit data, WaterWatchers represents a new kind of data aggregation, analytics and visualization for water planners in South Africa – and is exactly the kind of Big Data challenge IBM excels at solving.” 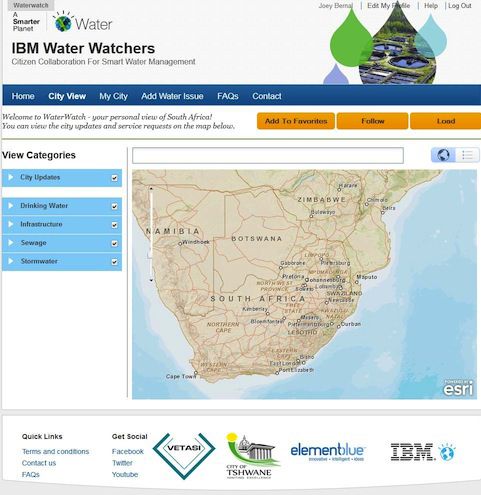 IBM began exploring crowdsourcing to address water related issues in the city of San Jose, California, with its CreekWatch mobile app, which is still available and currently being used in more than 25 countries. WaterWatchers was adapted from the CreekWatch concept to include additional capabilities such as SMS and the ability to share photos on social networks such as Facebook and Twitter.

Under spending on water in South Africa has seen the department of water affairs increase spending by 20% to R9 billion ($900M USD) in 2011- 2012. Similarly, spending on water sector management has increased by 28.8% year on year over the same period and spending on water infrastructure management has risen by 13.2% year on year. But the pressure of urban population influx continues to place more strain on ageing water infrastructure. According to the 2011 Census, ninety-three percent of South African households had access to safe water in 2010 but only 45% of those with access to water actually had it in their homes.

A WaterWatchers report will be made available to local municipalities, water control boards and other water system stakeholders once the data is filtered appropriately.  This could help local municipalities vizualise and prioritize improvements to city water infrastructure.

The WaterWatchers platform holds enormous potential for similar applications that can be used to monitor and report on just about any aspect of one’s environment: city services (report potholes, late buses), wildlife, noise pollution, air quality, weather and more.

“This project is a natural extension of the work we have done to address non-revenue water in Tshwane with IBM, and as the capital city we will lead the roll out of this program nationally,” said Tshwane Executive Mayor, Councillor Kgosientso Ramokgopa. “We challenge other cities to join the initiative and help manage this precious resource as best as we can.”

Interest in IBM’s Smarter Planet strategy to transform growing cities and address massive urbanisation in the South Africa has grown rapidly. The City of Johannesburg has strategically addressed its 2030 vision and partnered with IBM to develop a roadmap for Smarter Public Safety. The City of Tshwane has led the way in addressing water challenges, addressing ever increasing water scarcity and the requisite water conservation with a nine point plan developed by IBM Corporate Service Corps in 2011.