Study Sheds Light on How Heat is Transported to Greenland Glaciers

Warmer air is only part of the story when it comes to Greenland’s rapidly melting ice sheet. New research by scientists at Woods Hole Oceanographic Institution (WHOI) highlights the role ocean circulation plays in transporting heat to glaciers.

Greenland’s ice sheet has lost mass at an accelerated rate over the last decade, dumping more ice and fresh water into the ocean. Between 2001 and 2005, Helheim Glacier, a large glacier on Greenland’s southeast coast, retreated 5 miles (8 kilometers) and its flow speed nearly doubled.

A research team led by WHOI physical oceanographer Fiamma Straneo discovered warm, subtropical waters deep inside Sermilik Fjord at the base of Helheim Glacier in 2009.  “We knew that these warm waters were reaching the fjords, but we did not know if they were reaching the glaciers or how the melting was occurring,” says Straneo, lead author of the new study on fjord dynamics published online in the March 20 edition of the journal Nature Geoscience.

The team returned to Greenland in March 2010, to do the first-ever winter survey of the fjord. Using a tiny boat and a helicopter, Straneo and her colleague, Kjetil Våge of University of Bergen, Norway, were able to launch probes closer to the glacier than ever before—about 2.5 miles away from the glacier’s edge. Coupled with data from August 2009, details began to emerge of a complicated interaction between glacier ice, freshwater runoff and warm, salty ocean waters. 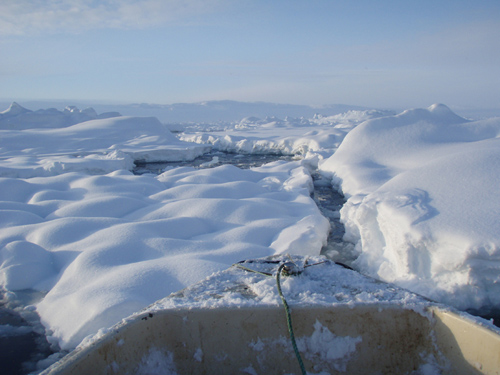 Using a tiny boat and a helicopter, the research team returned to Greenland in March 2010, to do the first-ever winter survey of Sermilik Fjord at the base of Helheim Glacier. During the trip, they were able to launch probes closer to the glacier than ever before—about 2.5 miles away from the glacier’s edge. Image credit: Fiamma Straneo, Woods Hole Oceanographic Institution

“People always thought the circulation here would be simple: warm waters coming into the fjords at depth, melting the glaciers. Then the mixture of warm water and meltwater rises because it is lighter, and comes out at the top. Nice and neat,” says Straneo. “But it’s much more complex than that.”

The fjords contain cold, fresh Arctic water on top and warm, salty waters from the Gulf Stream at the bottom. Melted waters do rise somewhat, but not all the way to the top.

“It’s too dense,” Straneo says. “It actually comes out at the interface where the Arctic water and warm water meet.”  This distinction is important, adds Straneo, because it prevents the heat contained in the deep waters from melting the upper third of the glacier. Instead, the glacier develops a floating ice tongue—a shelf of ice that extends from the main body of the glacier out onto the waters of the fjord. The shape of the ice tongue influences the stability of the glacier and how quickly it flows.

In addition, the team found that vigorous currents within the fjord driven by winds and tides also play a part in melting and flow speed. “The currents in the fjord are like waves in a bath tub,” Straneo says. “This oscillation and mixing contribute to heat transport to the glaciers.” 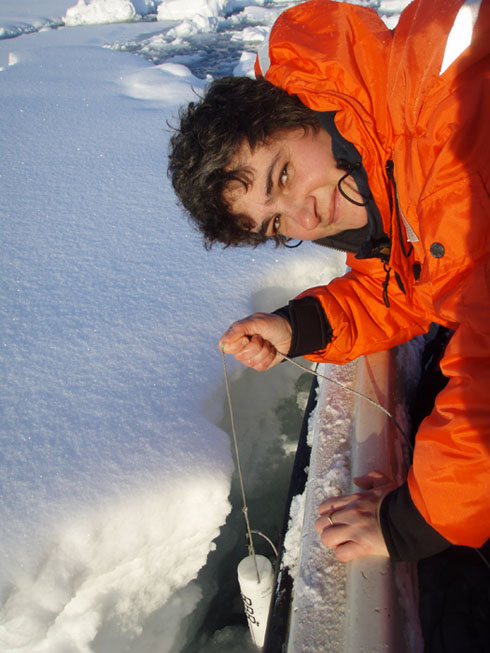 The March 2010 trip marked the first time the researchers were able to observe winter-time conditions in the fjord, which is how the system probably works nine months out of the year.

“One surprise we found was that the warm waters in the fjord are actually 1 degree Celsius warmer in winter, which by Greenland standards is a lot,” Straneo says. “It raises the possibility that winter melt rates might be larger than those in the summer.

“Current climate models do not take these factors into account,” she adds. “We’re just beginning to understand all of the pieces. We need to know more about how the ocean changes at the glaciers edge. It’s critical to improving predictions of future ice sheet variability and sea level rise.”