Hydraulic fracturing often brings up large volumes of water that need to be managed. A study led by The University of Texas at Austin has found that in the Permian Basin, a large oil field in Texas and New Mexico, reusing water at other well sites is a viable way to deal with the water that could also reduce potential instances of induced seismicity. 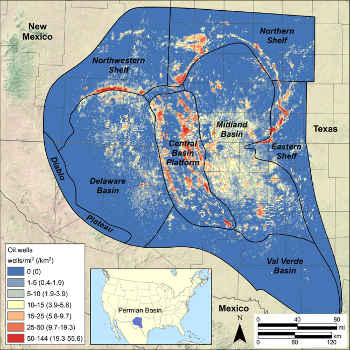 A map showing the Permian Basin and the distribution of oil wells in the region. Image credit: Bridget Scanlon/UT Austin

The UT Bureau of Economic Geology led the study that highlights key differences in water use between conventional drill sites and sites that use hydraulic fracturing, which is rapidly expanding in the Permian. The study was published in Environmental Science & Technology on Sept. 6, with results indicating that recycling water produced during operations at other hydraulic fracturing sites could help reduce potential problems associated with the technology. These include the need for large upfront water use and potentially induced seismicity or earthquakes, triggered by injecting the water produced during operations back into the ground.

“What I think may push the reuse of produced water a little more are concerns about over-pressuring and potential induced seismicity,” said lead author Bridget Scanlon, a senior research scientist and director of the bureau’s Sustainable Water Resources Program. “In the Permian we have a good opportunity for reusing or recycling produced water for hydraulic fracturing.”

Scanlon co-authored the study with bureau researchers Robert Reedy, Frank Male and Mark Walsh. The bureau is a research unit of the UT Jackson School of Geosciences.

The study analyzed 10 years’ worth of water data from 2005 to 2015. The researchers tracked how much water was produced and how it was managed from conventional and unconventional wells and compared those volumes with water use for hydraulic fracturing.

The study points out that instead of injecting the produced water into these formations, operators could potentially reuse the water from unconventional wells to hydraulically fracture the next set of wells. Enough water is produced in the Midland and Delaware basins in the Permian to support hydraulic fracturing water use, and the water needs only minimal treatment (clean brine) to make it suitable for reuse.

Marc Engle, the chief of a U.S. Geological Survey program on water use associated with energy production, said that the study provides a comprehensive, data-driven look into how water is managed in the rapidly changing Permian Basin.

“This work by Scanlon et al., for the first time, provides interested stakeholders with a detailed view of water inflows and outflows from the Permian Basin,” said Engle. “Moreover, the work captures temporal trends through an important period where the industry shifted from vertical wells in conventional reservoirs to vertical then horizontal wells in continuous reservoirs.”

Although there is enough produced water for reuse, Scanlon said that infrastructure, questions about produced water ownership, and low cost of fresh or brackish groundwater may currently keep disposal practices as they are. But as unconventional operations in the Permian grow, reusing produced water may become more attractive.

The study was funded by the Cynthia and George Mitchell Foundation, the University of Texas Energy Institute, the Tight Oil Resource Assessment consortium and the Jackson School of Geosciences.