A new study argues that the “swimmers” of the natural world — from ships at sea to microorganisms floating through the bloodstream to ubiquitous quantum particles — exert a predictable influence on each other within seemingly chaotic environments. 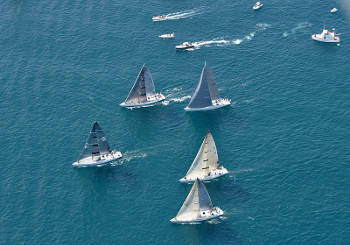 Researchers have come up with a model for explaining the attraction and repulsion between nature’s “swimmers.” Image credit: Don Ramey Logan (Source: Wikipedia)

Researchers at Yale, Harvard, Oxford, and the Nordic Institute for Theoretical Physics have devised a model for explaining the attraction and repulsion between objects as waves rise and fall around them. The findings, reported Aug. 15 in the Proceedings of the National Academy of Sciences, suggest a unifying theory for how force is generated in nonequilibrium systems.

“What we find is that if the spectrum of waves has a particular structure — sharply peaked — then depending on how far apart floating objects are from each other, sometimes they will attract and sometimes they will repel each other,” said senior author John Wettlaufer, the A.M. Bateman Professor of Geophysics, Mathematics and Physics at Yale.

“An entire range of things can be explained in this manner, from microscopic to boats. If you give us the spectrum of waves or fluctuations we can tell you what the forces will be between objects,” Wettlaufer said.

The study may be found here  online.