Study: People Pay More Attention to the Upper Half of Field of Vision

A new study from North Carolina State University and the University of Toronto finds that people pay more attention to the upper half of their field of vision – a finding which could have ramifications for everything from traffic signs to software interface design.

“Specifically, we tested people’s ability to quickly identify a target amidst visual clutter,” says Dr. Jing Feng, an assistant professor of psychology at NC State and lead author of a paper on the work. “Basically, we wanted to see where people concentrate their attention at first glance.”

Researchers had participants fix their eyes on the center of a computer screen, and then flashed a target and distracting symbols onto the screen for 10 to 80 milliseconds. The screen was then replaced by an unconnected “mask” image to disrupt their train of thought. Participants were asked to indicate where the target had been located on the screen.

Researchers found that people were 7 percent better at finding the target when it was located in the upper half of the screen. 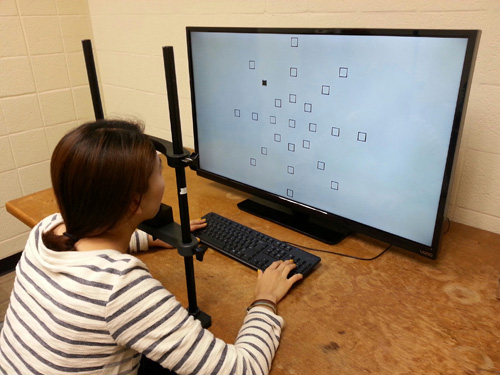 “A difference of 7 percent could make a significant difference for technologies that are safety-related or that we interact with on a regular basis,” Feng says. “For example, this could make a difference in determining where to locate traffic signs to make them more noticeable to drivers, or where to place important information on a website to highlight that information for users.”

The paper, “Upper Visual Field Advantage in Localizing a Target among Distractors,” is published online in the open-access journal i-Perception. The paper was co-authored by Dr. Ian Spence of the University of Toronto. The work was supported, in part, by the Natural Sciences and Engineering Research Council of Canada.