Millions of people across the world live or depend on deltas for their livelihoods.

Formed at the lowest part of a river where its water flow slows and spreads into the sea, deltas are sediment-rich, biodiverse areas, a valuable source of seafood, fertile ground for agriculture, and host to ports important for transportation.

At least half of the deltas around the world are so-called “wave dominated deltas” – open to the sea and under the impact of wave erosion. And many more deltas will come under wave dominance as dammed rivers carry less and less sediment. In a warming climate, sea levels are rising and storms are increasing in frequency and severity, posing threats to these deltas and the people and habitats dependent on them.

“Waves are a relentless machine, wearing down the coast. They never stop,” says Liviu Giosan, a geologist with Woods Hole Oceanographic Institution (WHOI). “Understanding how sediment feeds the lowlands of the delta plain is crucial for protecting them. We know that the rate at which the deltas replenish themselves at present from sediment-starved rivers can’t keep pace with erosion from wave action and rising sea level.” 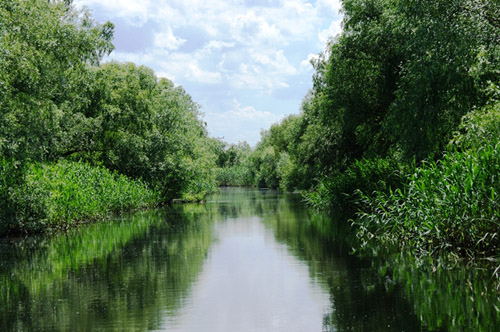 A new study by Giosan and his colleagues documents the historic sediment record along the Danube River delta, and offers simple and inexpensive strategies for other deltas to enhance their natural ability to trap sediment and maintain their floodplains.

The paper is the only invited research article in the inaugural issue of Anthropocene, a new journal addressing the problems of the “Age of Humans,” the period in Earth’s history that is characterized by the unprecedented, global impact, humans have had on the environment.

As the main European waterway for trade between the East and West, the Danube River and its delta have been the focus of observation for over a hundred of years.

“We can gain a very good understanding of what’s happened at the coast from a long series of maps, old and new. But we don’t know a lot about the delta plain, what kind of sediments were deposited there, and how much,” says Giosan. 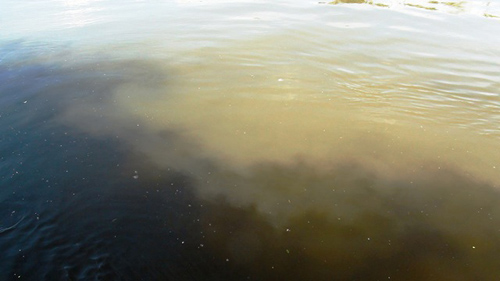 Using this wealth of historic data as well as analyses of sediment cores, the team pieced together the whole story of the Danube delta’s growth and destruction from both natural and human-induced causes.

To better understand the cycles of sedimentation across the delta plain, the researchers took core samples at representative sites in wetlands and at lakes, and used radiocarbon analysis to date very old layers in the core. For younger material, the radioisotope Cesium 137 in the cores provided clear markers of time and human activity, with the start of nuclear bomb testing in 1954, the peak of testing in 1964, and the explosion of the nuclear reactor at Chernobyl in 1986.

“We were able to look at this partition, how much sediment stayed on the plain, and how much went to the coast in the period before and after human activity had an impact,” he says, which is something the researchers say is poorly understood in deltas around the world. 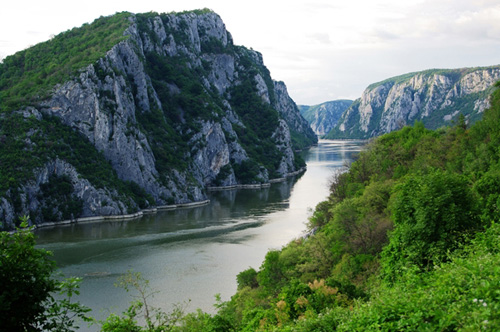 Human impacts on a delta’s natural process may extend back as far as 2000 years ago, as extensive deforestation and agricultural cultivation resulted in greater quantities of sediment flowing into the Danube and overextending the delta into the Black Sea.

As recently as the 1960s and ‘70s, humans have had the opposite affect on the delta, starving it of sediment with the construction of dams like Iron Gates dams — some of the largest in the world—and hundreds of other dams, large and small, on tributary rivers from Germany, to Hungary, to Bulgaria and Romania. Researchers estimate damming reduced the sedimentation on the Danube by at least 70 percent. 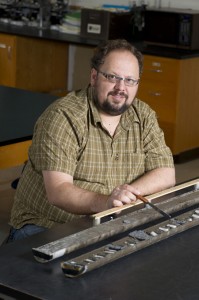 The data from the cores allowed the researchers to examine periods when humans started to engineer the delta’s natural channels in order to improve fish production. Channel cutting was intensified in the 1950s to enable industrial-scale fishing and exploit the abundant natural resources.

“It was a huge government-sponsored intervention, when very shallow channels, about one meter deep, were cut crisscrossing the entire delta,” says Giosan. “That allowed the sediment-laden flood water of the Danube to penetrate inland,” depositing sediment and nutrients from the river and building the plain.

From this grand but inadvertent experiment, the researchers found that the channels made by humans mirrored the natural distributaries that form when the mud, silt, and sand build landforms that rise above the surface of the flood plain. These elevated areas divert the flow of water from the river, which spreads across the land distributing sediment and nutrients on the delta plain.

“If we mimic this kind of favorable situation, typical for young deltas but unusual for mature or dying deltas, we can take advantage even of the low sediment discharge that we still have on the rivers, and keep that sediment on the flood plain, rather than losing it into the sea,” says Giosan.

The researchers emphasize that with reduced sediment input and sea level rise, the delta will have to come to equilibrium in a smaller area. That means that, short of hard engineering, the seaward regions cannot be fully preserved all along the coast of any delta. The researchers point out, however, that most of the sediment eroded by wave action will move along the coast where at some point it will form new land, such as strand plains and sandy barriers.

“Even if we restore the entire sediment supply, very few delta coasts will have a chance to keep up with wave erosion and sea level rise,” says Giosan. “But with intelligent, long-term thinking, we can use nature to protect inland delta plain biodiversity and productivity, and, at the same time, let wave erosion build new coastal lands for us. The main point is that without such forward planning, much of our invaluable deltas will be lost.”