Researchers from four universities, including the University of Washington, estimate that nearly a half-million people died from causes attributable to the war in Iraq from 2003 through 2011.

The results, from the first population-based survey since 2006 to estimate war-related deaths in Iraq and the first covering the conflict’s full timespan, are published Oct. 15 in the open-access journal PLOS Medicine.

The researchers found, with 95 percent certainty, that there were some 461,000 more deaths during the study period than would have occurred naturally, but the actual number could be as low as 48,000 or as high as 751,000. (For comparison, three years after the 2010 earthquake in Haiti, the death toll has been estimated anywhere between 46,000 and 316,000).

The researchers found that for every three people killed by violence during the U.S.-led invasion and occupation of Iraq from 2003 to 2011, two more died as a result of the collapse of the infrastructure that supports health care, clean water, nutrition and transportation.

“Policymakers, governments and the public need better data on the health effects of armed conflict,” said lead author Amy Hagopian, a UW associate professor of global health.  “Without this information, it’s impossible to assess the true human costs of war.” 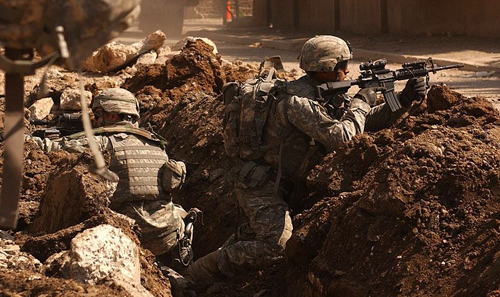 Researchers detailed improvements in estimating mortality during the Iraq war  and emphasize the public health consequences of armed conflict.

More than 60 percent of those deaths were directly attributable to violence while the rest were associated with indirect, but war-related, causes.

To conduct this study, researchers went to 2,000 randomly selected households in Iraq in 100 clusters throughout the country to ensure the sample of households was nationally representative. They asked every household head about births and deaths since 2001, and all household adults about mortality among their siblings. According to survey results, researchers estimated about 405,000 excess Iraqi deaths attributable to the war through mid-2011. Researchers also used secondary data sources to estimate rates of death among 2 million emigrants and conservatively estimate 55,805 total deaths in that group. Only 24 households refused to participate in the study.

Researchers also detail the limitations of their study and the uncertainty intervals, similar to confidence intervals, in their analysis.

The study analyzed death rates before the war and, through surveys and statistical analyses, estimated excess deaths that were above pre-war rates. Deaths attributable directly to violence were primarily from gunshots, car bombs and explosions. Cardiovascular conditions were the principal cause of about half of nonviolent deaths. War-induced excess deaths not caused by violence include those caused by diversion medical care to focus on crisis care, interruption of distribution networks for crucial supplies and the collapse of infrastructure that protects clean water, nutrition, transportation, waste management and energy.

Deaths increased to twice expected levels at the onset of the war, plateaued briefly at the end of 2003, then rose again to a new peak in 2006. Thereafter, deaths dropped until 2008, when they leveled off and then rose again slightly in 2011.

Previous estimates had covered different periods up to 2006 and arrived at a significant range of findings. Hagopian and colleagues say their new study offers considerable methodological improvements, both with regard to sampling procedures and the amount of data collected from all adults in the households. They also adjusted their results to account for the migration of an estimated 2 million people from Iraq during the war.

“There were two big reasons to do this study: to cover the entire period of the war and to improve on the groundwork laid by earlier studies,” said Gilbert Burnham, professor and co-director of the Center for Refugee and Disaster Response at Johns Hopkins. “By broadening the sources of information we used and by covering the full length of the conflict, this study provides a more complete picture of mortality during the Iraq war.”