The mystery of how the surface of Mars, long dead and dry, could have flowed with water billions of years ago may have been solved by research that included a University of Washington astronomer.

There is evidence that Mars had water at its surface 3.8 billion years ago or before, but scientists are divided on how that might have happened, especially since the sun was about 30 percent fainter back then, thus less able to melt water ice on Mars.

Earlier efforts with computer models to simulate a warm, wet Mars using only carbon dioxide and water have not been successful. Now, researchers at Pennsylvania State University and the UW have published a paper arguing that the presence of a third ingredient alters that outcome, strengthening the greenhouse effect — where heat energy from sunlight is trapped in the atmosphere — enough to warm the surface and allow liquid water.

“We found that sprinkling a small amount of molecular hydrogen into a thick atmosphere composed primarily of carbon dioxide does the trick,” said coauthor Tyler Robinson, a UW postdoctoral researcher. “While carbon dioxide is a strong greenhouse gas, it can’t solve the early Mars problem on its own. But carbon dioxide and hydrogen make a great team.” 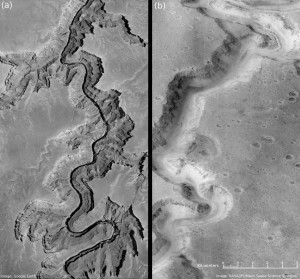 A river ran through it: A split panel comparing a section of Arizona’s Grand Canyon, left, with a section of Mars’ Nanedi Valles in the Lunae Palus quadrangle of Mars. The northern part of the image shows that a river once cut through it similar to the one flowing through the Grand Canyon. Image credit: NASA / JPL (Click image to enlarge)

The paper was published Nov. 24in the journal Nature Geoscience. The lead author is Ramses Ramirez, a doctoral student at Penn State working with planetary scientist James Kasting, a coauthor.

For the paper, Ramirez and postdoctoral researcher and coauthor Ravi Kopparapu of Penn State developed a computer climate model demonstrating that gases from early Martian volcanic activity could have sent enough hydrogen and carbon dioxide into the atmosphere to create a strong greenhouse effect and raise temperatures enough to allow liquid water on the surface.

“This is exciting because explaining how early Mars could have been warm and wet enough to form the ancient valleys had scientists scratching their heads for the past 30 years,” Ramirez said. “We think we have a credible solution to this great mystery.”

Robinson of the UW worked with Ramirez and Kopparapu to help ensure that radiation physics in the Penn State model was as accurate as possible.

“A warm and wet Mars brings to mind a climate like modern Earth,” Robinson said. “Maybe, also like Earth, a warm and wet early Mars could have had life.”

Other coauthors of the paper are Michael E. Zugger of Penn State and Richard Freedman of the SETI Institute.

Funding for the research came from the NASA Astrobiology Institute’s Virtual Planetary Laboratory.