Students studying what they love is a well-established principle at Brown. For Tyler Coverdale, that meant the outdoors, the environment, and, ultimately, some provocative research on Cape Cod salt marshes through GIS-assisted analysis of historical aerial photography. He loves it.

Tyler Coverdale’s newly published study in Frontiers in Ecology and the Environment on the collapse of salt marsh habitats along Cape Cod tells an intriguing, if unfortunate, tale of how three different human activities spanning 70 years finally added up to a problem that no one anticipated. The story of how he made the discovery — which is generating some buzz in ecology — while a Brown undergraduate is a tale of happier serendipities.

Consider that when Coverdale first came to Brown from Ohio in 2006 he wanted to concentrate in history, not ecology. But as an avid outdoorsman who chose Brown because of its open curriculum, Coverdale took Jon Witman’s introductory ecology class. He became hooked on the science and the idea of field research.

“Before that I was never really exposed to the fact that people did biological research for a living,” he said. “And then I saw these research papers and I’m kind of an outdoorsy person — I enjoy fishing and hiking and that kind of thing — and it was like here are people who are getting paid to do just that. They are doing the kinds of things I have been interested in my whole life.” 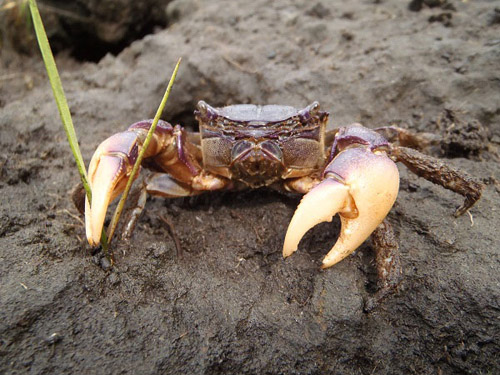 Grazing without fear of predators. As recreational fishing eliminated its predators, the Sesarma was able to eat its way unchecked through acres of Spartina grass in Cape Cod salt marshes, eating away the marshes from the inside. Image credit: Tyler Coverdale

Bertness had begun studying the marsh grass die-off on Cape Cod, which has been extensive in some places and not nearly as dire in others. The team noticed that the die-off seems to occur in well-developed stretches where recreational fishing is the most prevalent. When the team published a paper in Ecology establishing a connection between fishing and die-off in June 2012, Coverdale was one of the co-authors. This marked his debut as a published author, although several papers with his name have come out since.

“It was definitely exciting to see my name on that,” he said. “That’s something I enjoy about publishing papers: the idea that you are contributing to this body of knowledge that people have and the creative aspect of doing science. We didn’t have this knowledge before and if nobody had bothered to do it we still wouldn’t understand what’s going on. That really motivates me personally to keep doing this.”

Coverdale is applying to graduate schools now, but Bertness said he has already amassed an impressive CV of publications.

“He is a more accomplished experimental ecologist than most Ph.D. students when they finish their degree or postdoc,” Bertness said. 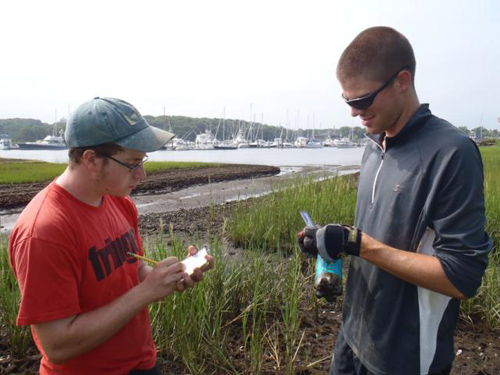 History from the air

During the course of the research, Coverdale would learn that there was a deeper backstory to the tragedy of the marsh than recreational fishing alone, but that discovery would require another fateful foray allowed by Brown’s open curriculum. In his senior year, he took a geology class that happened to include lessons on geographic information systems (GIS) technology, a tool that allows for expert analysis of data with maps and aerial imagery.

With a historical bent, Coverdale realized that analysis of aerial images from the past might help him trace the earliest origins of marsh die off. The idea became Coverdale’s senior thesis project.

The results not only helped him earn his degree, but also lead authorship on the new paper in Frontiers in Ecology and the Environment. The paper has so intrigued colleagues at the Ecological Society of America that they commissioned a press release about it.

Through GIS analysis of aerial images of Cape Cod from the 1930s through the last decade, Coverdale and his co-authors show how the seeds of the marshes’ destruction were sewn decades ago. The problems began with a Great Depression-era project of digging narrow ditches to drain the marshes and thereby reduce mosquito populations.

The trenches didn’t do any apparent ecological harm in the 1930s, the aerial photos show, but by creating channels for water to flow into the marsh interior, they opened the door to a kind of marsh grass, Spartina alterniflora, that typically grows only along the water’s edge. Surely a few narrow strips of this grass along the banks of these thin ditches wasn’t bound to be a problem.

Starting in the 1940s, however, Cape Cod underwent extensive development. The construction of houses, stores, and other buildings destroyed a lot of marsh directly, but the construction of piers and marinas turned out to be the second step of the more insidious problem.

When environmental protection laws shut down new development on Cape Cod in the 1970s, marshes were not saved. Aerial photos from the period establish the extent of direct marsh loss and also pinpoint the locations of new infrastructure to support recreational fishing.

In the ensuing decades anglers have pulled top predators out of the waters near developed areas. That has allowed the Sesarma reticulatum crab, which eats Spartina alterniflora, to roam unchecked. The plague of Sesarma crabs has not only consumed Spartina alterniflora along the shore where it originally grew, but also along the banks of the ditches where it has been growing since the 1930s. In other words, decades after the ditches were dug, construction and then overfishing have transformed them into inroads for crabs that are eating away the marsh from the inside.

Aerial images show how the marshes have died off much more in areas with fishing infrastructure and ditches than in areas without either.

Although by fall Coverdale will be on to other work at another institution, he’s not done publishing on the marshes yet. His aerial pictures also show a closely related problem that will be the subject of his next paper: The ditches have been widening sometimes to as much as 100 feet. It’s the product of a vicious cycle: Sesarma crabs eat Spartina alterniflora along the ditch banks, the denuded banks erode, new grass grows on the new bank, the crabs eat that grass, the bank erodes further…

Maybe now that it’s understood, the cycle can be broken. What will continue, however, is that more students will come to Brown, explore their curiosity through the open curriculum, and make important and unexpected new discoveries.