Using a brain-imaging technique that examines the entire infant brain, researchers have found that the anatomy of certain brain areas – the hippocampus and cerebellum – can predict children’s language abilities at 1 year of age.

The University of Washington study is the first to associate these brain structures with future language skills. The results are published in the January issue of the journal Brain and Language.

“The brain of the baby holds an infinite number of secrets just waiting to be uncovered, and these discoveries will show us why infants learn languages like sponges, far surpassing our skills as adults,” said co-author Patricia Kuhl, co-director of the UW’s Institute for Learning & Brain Sciences.

Children’s language skills soar after they reach their first birthdays, but little is known about how infants’ early brain development seeds that path. Identifying which brain areas are related to early language learning could provide a first glimpse of development going awry, allowing for treatments to begin earlier.

“Infancy may be the most important phase of postnatal brain development in humans,” said Dilara Deniz Can, lead author and a UW postdoctoral researcher. “Our results showing brain structures linked to later language ability in typically developing infants is a first step toward examining links to brain and behavior in young children with linguistic, psychological and social delays.” 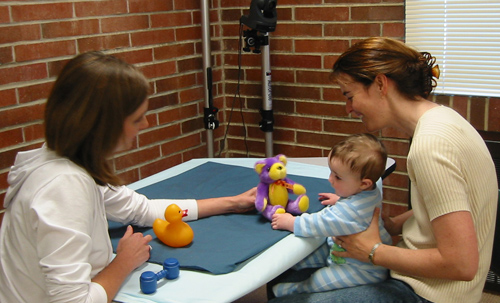 In the study, the researchers used magnetic resonance imaging to measure the brain structure of a mix of 19 boys and girls at 7 months of age. The researchers used a measurement called voxel-based morphometry to determine the concentration of gray matter, consisting of nerve cells, and of white matter, which make up the network of connections throughout the brain.

The study is the first to relate the outcomes of this whole-brain imaging technique to predict future ability in infants. The whole-brain approach freed the researchers from having to select a few brain regions for study ahead of time, ones scientists might have expected to be involved based on adult data.

Five months later, when the children were about 1 year old they returned to the lab for a language test. This test included measures of the children’s babbling, recognition of familiar names and words, and their ability to produce different types of sounds.

“At this age, children typically don’t say many words,” Deniz Can said. “So we rely on babbling and the ability to comprehend language as a sign of early language mastery.”

“Looking at the whole brain produced a surprising result and scientists live for surprises. It wasn’t the language areas of the infant brain that predicted their future linguistic skills, but instead brain areas linked to motor abilities and memory processing,” Kuhl said. “Infants have to listen and memorize the sound patterns used by the people in their culture, and then coax their own mouths and tongues to make these sounds in order join the social conversation and get a response from their parents.”

The findings could reflect infants’ abilities to master the motor planning for speech and to develop the memory requirements for keeping the sound patterns in mind.

“The brain uses many general skills to learn language,” Kuhl said. “Knowing which brain regions are linked to this early learning could help identify children with developmental disabilities and provide them with early interventions that will steer them back toward a typical developmental path.”

Todd Richards, a UW professor of radiology, was another co-author. The study was funded by the National Institutes of Health and the Santa Fe Institute Consortium.