Freeman Hrabowski and Vincent Tinto both believe that creating a culture of trust and support is a key ingredient in retaining students from underrepresented groups while achieving genuine campuswide diversity.

Hrabowski, president of the University of Maryland Baltimore County (UMBC), and Tinto, Distinguished Professor in the School of Education at Syracuse University, shared their expertise on diversity and student retention during the Student Success and Retention Conference, held Wednesday, Oct. 3, in the Trabant University Center on the University of Delaware campus in Newark.

“I’ve never doubted this University’s commitment to diversity, equity and inclusion, and I certainly don’t doubt it today,” Harker said. “The imperative for diversity — its urgency, here and elsewhere, and it’s requiring of our impassioned endorsement — are undiminished.”

Harker also noted that the University’s resolve to achieve these goals was given greater priority following the Middle States Commission on Higher Education’s report stating that the University trailed its peers in achieving diversity goals. 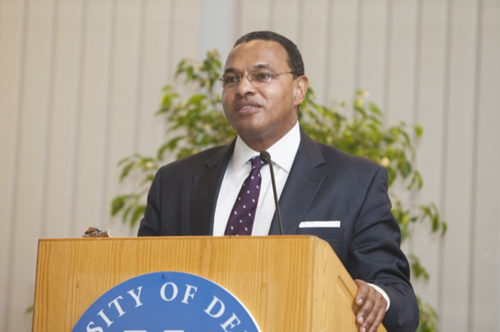 “The evaluation team exhorted us to commit ourselves forcefully and visibly to improving diversity,” Harker said. “The commission acknowledged that real progress in diversity requires a strong and long-term institutional commitment, and the vigorous endorsement and support of University leaders.”

The launching of the President’s Diversity Initiative and the Center for the Study of Diversity last winter was meant to accelerate UD’s diversity efforts, Harker said.

“The University’s diversity efforts are neither centralized nor decentralized. They’re both, and I think that’s how it should be,” Harker said. “I’m grateful for the enormous amount of time, interest and energy expended on diversity’s behalf, and the fact that we’re galvanized around an issue that we so clearly have the ability to influence.”

A self-described “super nerd,” with an affinity for poetry, Hrabowski opened his keynote talk, “Transformational Leadership: Creating a Climate of Success for All Students,” with lines from Asphodel, That Greeny Flower by William Carlos Williams — “It is difficult to get the news from poems, yet men die miserably every day for lack of what is found there.”

“When Pat [Harker] called me, it was very clear that he is really on a mission,” Hrabowski said. “When you think about what it takes to change a culture, to have substantive improvement in what you’re doing in this area, you really have to have a clear vision, starting with the leader of the institution.”

Citing the need for institutions to look behind statistics on their respective diversity achievements, Hrabowski advocated a specificity of examination that appreciates options for making a difference.

“You need to get to know your students,” Hrabowski said. “You need to ask what a student’s dream is, and what responsibility you have in helping that student fulfill that dream.” 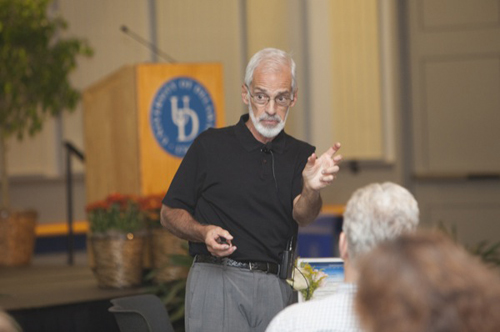 Supporting students in academic success and social engagement requires a look at an institution’s campus culture to make it more welcoming and supportive for all students, Hrabowski said.

“You have to find out what are the most important priorities are on your campus,” Hrabowski said. “One of your values is to be honest with yourself about the good, the bad and the ugly of the situation, and to develop a setting that is empowering for all students.”

Hrabowski urged attendees to listen to all students, including UD’s successful African American and Hispanic graduates, asking what worked for them and who helped them in their academic and social journeys.

“Delaware is an amazing place that has a reputation for solid academics and for having a fine environment for young people, and creating leaders,” Hrabowski said. “I am delighted that President Harker and the faculty and all of you have chosen to make this American issue one that will help define who you are because, make no mistake about it, our future, in large part, will be determined by the ability of places like Delaware to educate large numbers of Americans of all races.” 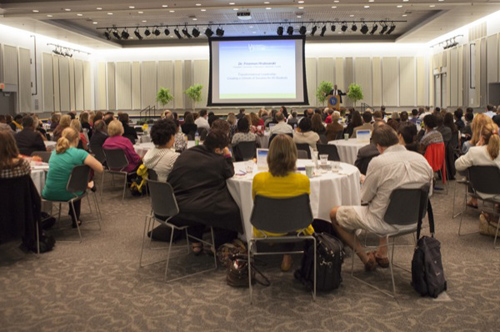 During his presentation, “Student Success Does Not Arise by Chance,” Tinto reminded attendees that “student success is not the result of good intentions — it is institutional.”

Tinto said that while many things that affect student success are beyond the control of the institution, leaders can evaluate settings where students are placed and where learning is supposed to take place.

“Institutions can ask such questions as “what do we have, what is it like, how we set up our structure,” Tinto said. “We need to look at how these conditions reflect decisions made in the past.”

“Expectations matter,” Tinto said. “No one rises to low expectations.” 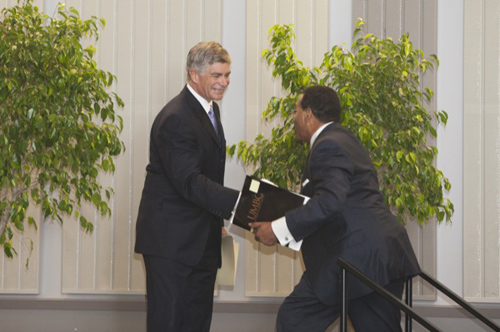 “Point of entry also is important. When students of color come to a strange campus, they have to decide what to do,” Tinto said. “Peer mentoring tells students what they have to do to navigate the campus.”

Tinto also stressed the importance of assessment and student feedback and creating an early warning system to indicate when a student might be in trouble.

“The secret of an effective early warning system is that it’s early,” Tinto said. “If students get confused early and they had similar problems in high school, their reaction is ‘here we go again.’ If you don’t have an early warning system, you’re not responding to this need.”

Studying with faculty and spending more time on task, particularly with others, also helps students perceive that they are valued members of a community, both socially and academically. Such students tend to stay at their institutions, Tinto said.

“The brain is turned on by engagement with others. It’s not enough just to have people study by themselves,” Tinto said. “When students work together in a class, they walk out together talking about what they did in that class.”

The event was sponsored by the Academic and Student Affairs Council.