It’s the first day of school in a brand new city for Ava Margaret Avignoli, and something strange is going on.

The third-grader notices muddy footprints that lead to a secret door in the back of Corridor C. Ava decides to figure out what’s going on, and her pursuit involves asking some pointed questions, conducting science experiments, and putting together a bunch of clues. She does so wearing colorful rhinestone-studded lab goggles and a multi-colored, patterned lab coat.

The creation of Yale junior Olivia Pavco-Giaccia, Ava is a character in the storybook “Ava and the Copper Key,” which by next spring will be in the hands of girls across the country and beyond.

Pavco-Giaccia remembers what she felt like as a young girl being among the few females in her science classes. Today, she is the CEO of the fledgling social enterprise LabCandy, which, through a variety of educational toys for young girls — including the storybook — aims to cultivate their interest in science by encouraging them to envision themselves in the field. 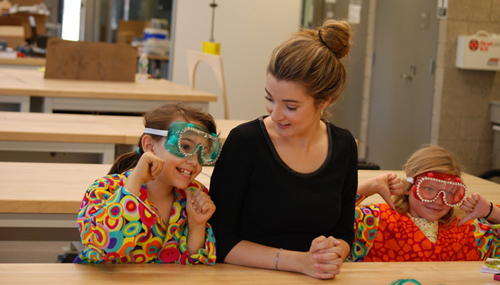 Pavco-Giaccia founded LabCandy with the support of the Yale Entrepreneurial Institute (YEI), where she first developed her idea for the company and learned how best to bring it to fruition, and she was one of the student entrepreneurs who gave a presentation at the AYA Assembly LXXIV held Nov. 13-15. She recently spoke to YaleNews about her quest to inspire young girls to imagine themselves as scientists. Here is what we learned.

Role models and mentors: Growing up as the daughter of two lawyers in Washington, D.C., Pavco-Giaccia did not consider herself a “science kid,” she says.

But in middle school and high school, she had two science teachers in quick succession who changed that view.

“I got lucky,” says Pavco-Giaccia. “Those science teachers were so passionate about what they do and loved it so much. They became role models for me.”

Her ninth-grade science teacher, Denise Reitz, was especially influential as a mentor, so much so that Pavco-Giaccia made her a character in “Ava and the Copper Key” and invited her to serve as a LabCandy adviser.

“As a character in the book, she helps Ava save the day just as she did with me many times,” says Pavco-Giaccia. “Science class can feel unwelcoming to a young girl, and she supported and encouraged me. It’s huge to have someone like that in your life.”

Reitz’s mentoring, the Yale student says, paved a path for her own decision to major in cognitive science.

Eyes bedazzled: After her junior year of high school, while working for the summer in a neurobiology lab at Stanford University, Pavco-Giaccia blogged about her experience there on a website hosted by the Center for Talented Youth. One day she posted a picture of some homemade rhinestone-studded goggles on her blog, called “Lab Candy: A Girl’s Guide to Some Seriously Sweet Science.”

“When I woke up the next morning, the blog was flooded with comments,” says Pavco-Giaccia. “People were asking where they could buy the goggles. I realized I had stumbled on something that really resonated with young girls.”

It wasn’t until she came to Yale, however, that Pavo-Giaccia decided to pursue her idea of making and selling the goggles. She had seen a poster advertising YEI and decided to make an appointment to talk with staff members there.

“I sat down with Wes Bray ’74 [former lead mentor at YEI] and Alena Gribskov [program director]] and told them I had this crazy idea to make bedazzled lab goggles,” recalls Pavo-Giaccia. “Miraculously, they didn’t laugh at me. Instead, they told me to apply for the YEI summer fellowship. I didn’t expect anything to come of my application, but after being interviewed by a host of interesting and enthusiastic business people, advisors, and other members of the YEI community, I ended up spending the summer after my freshman year as a fellow of the institute.”

The fellowship — awarded to the 10 most promising student startups on campus — allowed the Yale student to attend a 10-week startup “boot camp” during which she developed her entrepreneurial idea with the support of mentors and advice from a network of successful entrepreneurs and investors. YEI also awarded her a grant of $10,000 to take LabCandy to the next level.

An emerging plan: While she was a YEI summer fellow, Pavco-Giaccia had envisioned making her goggles for high school students. However, following the advice of her YEI mentors, she went out and talked with some 200 girls, along with their parents and other relatives, as well as teachers and scientists.

Through those conversations, Pavco-Giaccia realized that younger girls — from kindergarten through third grade — would be more interested in her goggles than older girls, and that building characters — and not just goggles — would better serve her mission of encouraging young girls to pursue the traditionally male-dominated fields of science, technology, engineering, and math (STEM).

“YEI gave me confidence  that this was something that I could seriously pursue,” the Yale junior comments. “Once I figured out my market, I had a dramatically different and better product. The fellowship was absolutely wonderful. Being an entrepreneur can be a little bit lonely in some ways because it’s just you working on your project. It’s so meaningful to have a space like YEI, where there are a number of diverse entrepreneurial teams. You have peers who are interested in doing some of the same things that you’re doing, and we feed off each other’s energy.”

Her summer at YEI — where she was the youngest fellow — ended with Pavco-Giaccia tying for first place in a competition in which all of the summer fellows pitch their business ideas.

A story takes shape:  Pavco-Giaccia began writing her story about Ava and enlisted the help of recent Yale graduate and graphic designer Emily Monjaraz ’14 to create the illustrations for the storybook. Her LabCandy team also grew to include Yale doctoral student Alexandra Teixeira as a business analyst, Yalun Zhang to handle social media, and graphic designer Yu-Yeon Cho, a student at the Yale School of Art, among others. In addition to her former teacher, Reitz, other advisers who have provided the Yale student meaningful support include Richard N. Foster, former director of McKinsey & Company Inc., who is a YEI executive in residence and lecturer at the Yale School of Management.

Pavco-Giaccia and her team began hand creating the goggles (in several colors) and the storybook about Ava, as well as lab coats in vibrant colors.

“I’m not trying to trivialize science and say that you have to be fashionable to be a scientist,” Pavco-Giaccia says of her products. “But I think that sometimes people forget that science is fun and colorful. The goggles might be pink and sparkly, but what they represent, I think, is the hope that science can be as unique and colorful as those who wear them. The goggles are the antithesis of the nerdy male scientist stereotype that I grew up with and that unfortunately persists today.”

She cites recent data that reveals that only 24% of STEM jobs are occupied by women and that only 27% of students are in STEM fields. Of those, only a quarter will end up in STEM careers, according to Pavco-Giaccia.

The Yale student’s Ava character is a “fun, vivacious girl who goes on an adventure and runs into a whacky problem that she solves using science,” says Pavco-Giaccia, whose storybook includes step-by-step instructions for Ava’s experiments — as well as others — that readers can do themselves. The book also provides space for its readers to write in their observations and hypotheses about the questions Ava must solve.

A kick start toward mass production: After speaking to hordes of business people in New York City’s Garment District, Pavco-Giaccia finally found a factory in Minnesota that can produce her lab coats.

Last fall, she started a Kickstarter campaign to raise the necessary funding to support factory production of her LabCandy products on a small scale. The campaign reached its funding goal in less than three days, and ended up raising more than $31,000.

On the night her Kickstarter campaign ended in mid-September, Pavco-Giaccia came home to a surprise in the common room of her residential college, Jonathan Edwards.

“About 25 of my closest friends were gathered in my suite, all wearing the LabCandy t-shirts I had made for the Kickstarter campaign,” she recounts. “The whole common room was decorated and filled with cheering people. It was one of those incredibly poignant moments. People always talk about how at Yale you’ll make great friends who will be your friends for the rest of your life. This was one of those moments where I thought ‘How lucky am I to be at this great place, surrounded by these amazing people, who took time out of their own schedules to celebrate with me.’”

Out into the world: The LabCandy team is now preparing for its first product order, due to be shipped around the world in February.

“It’s a little bit terrifying, like my baby is going off,” says Pavco-Giaccia.

She is excited about the knowledge she’s gained about entrepreneurship, but acknowledges, “Before coming to Yale, I never pictured I’d be an entrepreneur.”  She says that the hard work she put in to start her company did result in some curtailment of her social life on campus: This semester, she took a break from playing the cello for the Yale Symphony Orchestra, but she has continued her participation in the cello group Low Strung.

Pavco-Giaccia now plans to create a series of storybooks, each with a new main character — all young girls who are passionate about a particular field of science.

“Science isn’t what you find in dusty textbooks,” she says. “At its core, it is about creativity, critical thinking, and problem solving — specifically, solving real problems every day. It’s an adventure. That’s pretty cool.”

She hopes her young readers and goggle wearers remember that message as well as another: “If you are passionate about science — whoever you are or wherever you come from or however you look,” says Pavco-Giaccia, “you are what a scientist looks like!”