Yale junior Dinée Dorame, a member of the Navajo Nation and Tábaahá (Edge of Water clan) born for Naakaii Dine’é (Mexican people), hopes one day to help improve the lives of Indigenous women through a career in law or as a policy maker.

As one of 12 students in the nation selected by the Udall Foundation to be a 2014 Native American Congressional Intern, Dorame will get a first-hand look at federal decision-making this summer. Only three other undergraduates were selected for the competitive internship, which places American Indian and Alaska Native students in positions in Senate and House offices, Cabinet departments, the White House, or on federal committees, so they can get an insider’s view of the federal government at work.

The Yale student says she was ecstatic when she was selected as an intern, as the competition is especially fierce for undergraduate students. The Udall Foundation each year awards only a dozen of the internships to American Indians and Alaska Natives who are college juniors or seniors, recent graduates from tribal or four-year colleges, or graduate or law students. Those selected have demonstrated interest in the areas of tribal public policy, cultural preservation and revitalization, education, economic development, health, law, natural resources protection, or tribal governance.

“This is the internship in Indian Country for anyone who isn’t in the sciences,” comments Dorame. “I’m really excited that I’ll be working for the Department of Education because I really care about Native students getting to college. One of the big issues going on back home is that there are not enough educational and mentorship programs for Native students.” 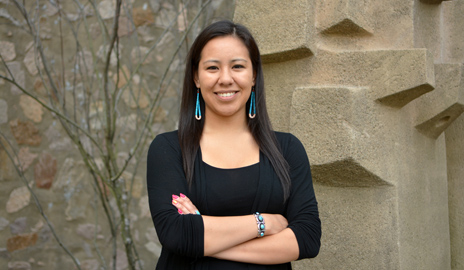 Dinée Dorame is one of four undergraduates in the nation to win the Udall Foundation’s 2014 Native American Congressional Internship. (Photo by Michael Marsland)

Cultural roots: Dorame is double-majoring in history and women’s, gender, and sexuality studies (WGSS), and plans a career that will allow her to address issues of gender-based violence and women’s health on reservations.

Growing up in Albuquerque, New Mexico, she made frequent trips to the Navajo reservation two hours away to visit her maternal grandmother and great-grandmother. Her mother is a full-blooded Navajo and her father is Mexican and Yacqui Indian.

Dorame says her experiences at home in conjunction with her experience in Title IX issues on campus inspired her interest in Native women’s issues, including domestic and sexual violence, and women’s health.

“Having my grandma and great-grandmother on the reservation really affected the way I’ve seen life,” the Yale student says. “My grandmother worked for the Indian Health Service system for over 30 years, so I have seen how that system works. There is also a strong female presence in my home — a lot of motherly love — and this too helped shape my interest in Indigenous women’s rights and women’s health advocacy.” 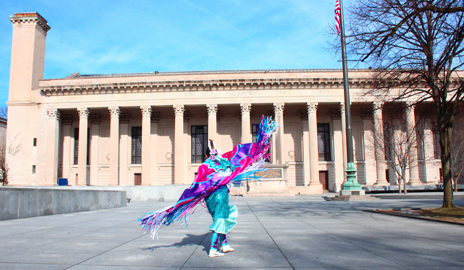 Charting her own path: After declaring a major in history at Yale, Dorame realized that many of the courses in which she enrolled were cross-listed in WGSS. She also enjoyed the women’s history courses she took during a Yale-in-London summer program.

“I started to study feminism, but a lot of Native women do not identify as feminists, and that’s something I’m still grappling with myself,” Dorame says. “Native women are rarely mentioned in cross-cultural calls for feminist activism. But one in three Native women will be sexually assaulted — on and off the reservation — and that’s an upsetting statistic to me.”

“I think I’m one of the only undergraduates focusing on Indigenous women’s rights and/or Native rights for my senior thesis,” Dorame says. “But through the courses I’ve found and the research I’ve been able to do, I really feel like I have made Native space in non-Native spaces at Yale. I have found different ways to explore Indigenous feminism.”

Creating community: Actively engaged in the Native community at Yale, Dorame was a freshman liaison for the Native American Cultural Center, is the former president of the Association of Native Americans at Yale (ANAAY), and currently works for the Office of Admissions as a recruitment coordinator. In that role, she encourages prospective and admitted Native students — as well as other students from her home state — to choose Yale as their college. In addition, she serves on the Yale President’s Office Undergraduate Title IX board.

Dorame is especially proud that her Yale class — the Class of 2015 — boasts the highest number of Natives ever to enter an Ivy League university, with 40 students. She was also involved in planning the Yale All Ivy Native conference, which took place earlier this month, focusing on the theme “Tradition and Sustainability, Narratives of Indigenous Adaptation.” Some 80 students from other Ivy League schools attended the event, which was a “smashing success,” says Dorame.

“One of the things that drew me to Yale was its residential colleges and the fact that the university integrates its Native students but also really supports them,” the Yale student says. “We have a beautiful Native American Cultural Center here, where we can cook, gather, study, watch television, or do beadwork,” says Dorame. “It’s my home-away-from-home.”

The Yale junior also co-founded Yale’s first Native American performance group, the Blue Feather Drum Group, which plays traditional and contemporary powwow music. She sings and performs fancy shawl dancing with the group. During the upcoming Bulldog Days, Dorame will meet with recently admitted Native students through her work at the Admissions Office and will also perform for them with Blue Feather.

Dorame, who has been powwow dancing since she was about 5 years old, describes fancy shawl dancing as “the fastest and most athletic” powwow dance in the women’s category.

“Powwow is a competitive dancing social — the sport of Indian Country,” she says. “Albuquerque has the biggest annual powwow in the world — The Gathering of Nations.” (See Dorame — who along with her mother made the regalia she wears by hand — performing a fancy shawl dance on Beinecke Plaza in this video shot on campus by a fellow student.)

Easing the cultural transition: Dorame, who was a high school basketball star and All-Metro Student-Athlete of the Year back home and was the Yale Daily News’ women’s basketball beat reporter for a year, is a member of the Ezra Stiles intramural basketball team. She will serve as a freshmen counselor in her residential college next year.

“I love Ezra Stiles College,” says Dorame. “[Ezra Stiles] Master Stephen Pitti has been my mentor here at Yale,” adding that he guided her through her freshman-year adjustment to college life. She is eager to welcome new freshmen making a similar transition.

“It was a bit of a culture shock for me to come to Yale,” she admits. “I come from a very close family, and it was hard for me to be away from them. I grew up near the mountains, and I was used to seeing the horizon every day. Here there are tall buildings and it’s cold! But my parents were really excited for me and said, ‘Go, go, go!’”

Beyond the internship: When she returns to Yale after her internship, Dorame will explore the trajectory of Indigenous feminism in America since the 1960s through pieces of legislation, such as the Violence Against Women Act. She hopes to attend law school after graduation, and eventually return home to the Southwest to engage in causes of importance to Native women, including ensuring their access to health care. Her interest in health care advocacy took on an even deeper meaning for her, she says, while watching her mother battle cancer this year.

Further down the road, Dorame is also intent on recruiting her 11-year-old sister, Nena, to Yale.

“She’s the greatest person ever, and she’s brilliant,” says the Yale junior, adding that she already has her top selling point in mind.

“Community is the #1 quality that defines Yale,” Dorame explains. “Seeing how Native students were so eager for me to attend and welcome me to campus is what got me here. I remember noticing that everyone at Yale looked happy. There is a genuine sense of community at Yale, and a vibrant Native one.”