A bonus payment to teachers can improve student academic performance — but only when it is given upfront, on the condition that part of the money must be returned if student performance fails to improve, research at the University of Chicago shows.

The study showed that students gained as much as a 10 percentile increase in their scores compared to students with similar backgrounds — if their teacher received a bonus at the beginning of the year, with conditions attached. There was no gain for students when teachers were offered the bonus at the end of the school year, the research found.

“This is the first experimental study to demonstrate that teacher merit pay can have a significant impact on student performance in the U.S.,” said UChicago economist John List, an author of the study.

The study, “Enhancing the Efficacy of Teacher Incentives through Loss Aversion: A Field Experiment,” published by the National Bureau of Economics Research, reflects the findings of other studies in psychology and behavioral economics.

“The results of our experiment are consistent with over 30 years of psychological and economic research on the power of loss aversion to motivate behavior: Students whose teachers in the ‘loss’ treatment of the experiment showed large and significant gains in their math test scores,” said List, the Homer J. Livingston Professor in Economics at UChicago.

“In line with previous studies in the United States, we did not find an impact of teacher incentives that are framed as gains (the reward coming at the end of the year),” he added. 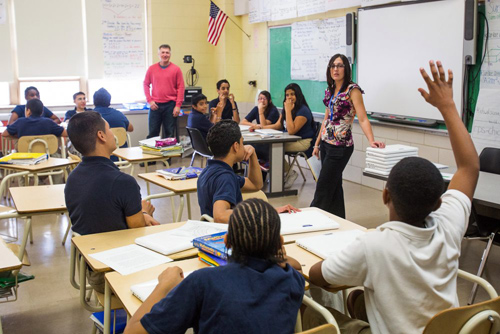 A UChicago-led study showed that students gained as much as a 10 percentile increase in their scores if their teacher received a bonus at the beginning of the school year. Photo by Jason Smith

The study comes amid a growing wave of interest of finding ways to provide teacher incentives to increase student performance. Those incentives are frequently tied to student performance on high-stakes standardized tests. None of the programs have been shown to work, however, the scholars said.

The new study depends on a formula developed by Derek Neal, professor of economics at UChicago, and Gadi Barlevy, an economist with the Federal Reserve Bank of Chicago. They devised the “pay for percentile” method of measuring teacher performance by comparing individual students with similar backgrounds and achievement to see what impact a teacher had on their learning.

The scholars used the formula in an experiment in Chicago Heights, Ill., a community 30 miles south of Chicago. The community has nine kindergarten to eighth-grade schools with a total enrollment of 3,200 students. Its achievement rates are below state average, and 98 percent of the students are eligible for free or reduced lunches.

At the beginning of the school year, the teachers were introduced to the experiment and offered an opportunity to participate. A total of 150 of the 160 teachers agreed to join in the study, which was supported by the local teachers union.

One group of teachers in the study was given a $4,000 bonus at the beginning of the year and told it would be reduced by an amount reflecting their students’ performance — the more the students’ standardized scores increased, the more of the bonus their teacher could keep. Another group of teachers was told they would receive a $4,000 bonus if their students improved during the year.

The incentives were based on rewarding teachers with $80 for each percentile of increase in their students’ mathematics performance over the district average. They could, depending on exceptional student performance, receive up to $8,000 under the plan — the equivalent of 16 percent of the average teacher salary in the district.

The students were tested with the ThinkLink Predictive Assessment, a standardized, non-high-stakes diagnostic tool that is aligned with state achievement tests.

Thomas Amadio, superintendent of Chicago Heights Elementary School District 170, where the experiment was conducted, said the study shows the value of merit pay as an encouragement for better teacher performance.

“Teachers do have challenges, and classes can vary from year to year in how well they perform. Testing students individually to see their growth is a valuable measure, however,” he said.  Teachers responsible for that growth should be rewarded, he said.

The study was supported with grants from the Broad Foundation (Fryer) and the Kenneth and Anne Griffin Foundation.