COLUMBIA, Mo. –When it comes to college-age individuals taking care of their bodies, appearance is more important than health, research conducted at the University of Missouri suggests. María Len-Ríos, an associate professor of strategic communication, Suzanne Burgoyne, a professor of theater, and a team of undergraduate researchers studied how college-age women view their bodies and how they feel about media messages aimed at women. Based on focus group research findings, the MU team developed an interactive play about body image to encourage frank discussions about conflicting societal messages regarding weight, values and healthful choices.

“During our focus group conversations, we learned that young people don’t think about nutrition when it comes to eating,” Len-Ríos said. “They think more about calorie-counting, which isn’t necessarily related to a balanced diet.” 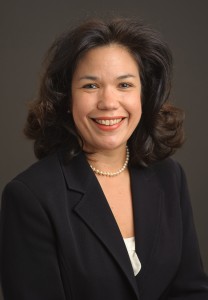 María Len-Ríos, an associate professor of strategic communication in the MU School of Journalism. Len-Rios studied how college-age women view their bodies and how they feel about media messages aimed at women. Image credit: University of Missouri

“We receive so many conflicting media messages from news reports and advertising about how we should eat, how we should live and how we should look,” Len-Ríos said. “Some participants said they realize images of models are digitally enhanced, but it doesn’t necessarily keep them from wanting to achieve these unattainable figures—this is because they see how society rewards women for ‘looking good.’”

The researchers also completed in-depth interviews with nutritional counselors who said lack of time and unhealthy food environments can keep college-age students from getting good nutrition.

“Eating well takes time, and, according to health professionals, college students are overscheduled and don’t have enough time to cook something properly or might not know how to prepare something healthful,” Len-Ríos said.

Based on the focus group conversations and interviews, Carlia Francis, an MU theater doctoral student and playwright, developed “Nutrition 101,” a play about women’s body images. During performances, characters divulge their insecurities about their own bodies, disparage other women’s bodies and talk about nutrition choices. After a short, scripted performance, the actors remain in character, and audience members ask the characters questions.

“When you’re developing something for interactive theater, focus groups and in-depth interviews are great at getting at stories,” Len-Ríos said. “Many of the stories used in the interactive play—like valuing people because of their appearance and not their personal qualities or abilities—came from individuals’ personal experiences.” 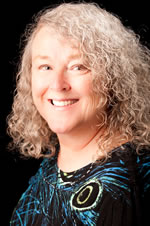 Suzanne Burgoyne, a professor of theater in the MU College of Arts and Science. Burgoyne worked with students to develop an interactive play about body image based on research conducted at MU. Image credit: University of Missouri

“Body image is a sensitive topic, and the play helps open discussions about how individuals view themselves and how media messages influence their self-images,” Burgoyne said. “An easy way to improve individuals’ body images does not exist, but hopefully, the conversations that arise from the performances will help develop ways to counteract the images that the media promote.”

The study, “Confronting Contradictory Media Messages about Body Image and Nutrition: Implications for Public Health,” was presented earlier this month at the annual Association for Education in Journalism and Mass Communication Conference in Chicago.