Educators and policymakers have spent decades trying to recruit and retain more underrepresented minority students into the science, technology, engineering, and math (STEM) pipeline. A new analysis of disappointing results in the pipeline’s output  leads two Brown University biologists to suggest measures to help the flow overcome an apparent gravity.

Senior author Andrew G. Campbell, associate professor of biology, said it’s almost as if people have satisfied themselves with the thought that the STEM pipeline rests on flat terrain, passively and reliably conveying to the finish whatever quantity of students enter. Instead, the pipeline has a steep rise against a gravity of endemic hindrances, he said. Data cited in the paper show that for decades many students haven’t made it to the top of the pipeline. What’s needed to stem the leaks and backflow, is consistently applied energy all the way through the pipeline.

“That pipeline we’ve laid? We’re stuffing it but the yield is less than we expect,” said Campbell, who wrote the review along with postdoctoral scholar Stacy-Ann Allen-Ramdial. “That’s because it’s not a horizontal pipeline, it’s a vertical one. You can’t just stuff it and walk away.” 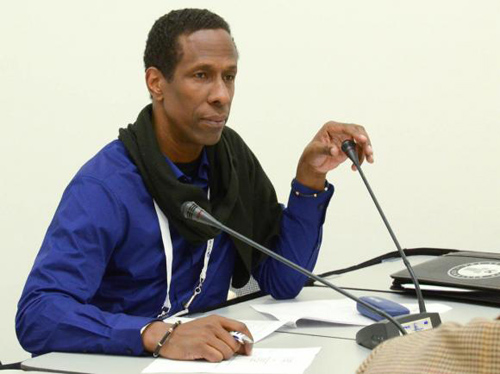 Andrew G. Campbell. “It’s not a horizontal pipeline, it’s a vertical one. You can’t just stuff it and walk away.” Image credit: Brown University

The data look good at the pipeline entrance: Similar proportions of underrepresented minority (URM) and non-URM incoming college freshmen (a little more than a third in each case) express an intent to study STEM subjects. Generally, however, URM students are less likely to graduate than non-URM students. While 24.1 percent of U.S. college freshmen came from URM groups in 2000, only 18.5 percent of bachelor’s degree recipients did in 2004.

The workplaces those surviving STEM students entered at the other end of the pipeline were even less diverse. Individuals from URM groups held about 10 percent of STEM jobs in 2010.

To serve the volume of students entering the pipeline, Campbell and Allen-Ramdial argue that educators and policymakers must enhance the conditions that will move them through the pipeline despite the gravity of several persistent problems in academic culture and practice. The authors propose four ideas based in educational research and practices that have emerged in recent years: alignment of culture and climate; partnerships between research and minority-serving universities; critical masses of minority students; and faculty engagement in diversity.

Universities often articulate diversity as a core value in STEM fields and elsewhere, but that culture can become misaligned with the actual climate in which faculty members, administrators, and students work. The potential dissonances, which can disillusion URM students, will vary but they often remain unknown to senior administrators and therefore unaddressed. Campbell and Allen-Ramdial recommend annual, confidential surveys of culture-climate alignment conducted by third parties, rather than the administration itself.

Campbell has extensive experience in forging partnerships between his research-intensive university and undergraduate-focused, minority-serving institutions. His work in a National Institutes of Health-funded program shows the partnerships can go beyond merely stuffing the pipeline. Campbell has worked with partner-institution colleagues to identify gaps in the undergraduate training of students that can and must be addressed to ensure their success in graduate school and research.

“The inconsistencies between successful undergraduate student performances documented in glowing reference letters and grades and the students’ subsequent poor graduate performance can be preempted by building interinstitutional partnerships that allow for curricular mapping of undergraduate courses onto graduate curricular training plans,” the authors wrote.

Also, such partnerships expose students to research earlier at undergraduate-focused institutions and provide faculty at research-intensive universities with opportunities to gain “cultural competence,” or familiarity with and understanding of URM students.

Partnerships and other thoughtful measures, such as focused recruiting, can help universities with graduate programs achieve not just overall numbers of URM students, but also a “critical mass” within URM groups. When a university meets a goal of bringing in 10 URM students, that won’t necessarily help those students thrive if they all come from very different backgrounds. Instead, Campbell and Allen-Ramdial note, universities should recognize that students need to be with others with whom they can identify and from whom they can find support.

“What is critical mass [in a program]?” Campbell said. “That number is when students feel the greatest sense of belonging. It doesn’t have to be hundreds. It could be five.”

Finally, the paper argues, diversity must be a goal embraced not only by senior administrators but also by faculty members. University presidents come and go, on average, every decade. Provosts and medical school deans turn over twice in that time. Tenure-line professors can have a more lasting impact because of the uninterrupted longevity of their work.

“Faculty members should be incentivized to engage more deeply in diversity by making it a meaningful scholarly activity, alongside research and teaching,” Campbell and Allen-Ramdial wrote. “The opportunity to formally report on diversity-related activities as part of annual review and reward criteria for merit and promotion should be established.”

The ultimate goal is not to attract URM students to STEM but to turn them into working scientists, Campbell said. Success won’t come from trying the same ideas that have only worked partially so far.