Scientists at the UCLA Eli and Edythe Broad Center of Regenerative Medicine and Stem Cell Research have made several discoveries that are critically important to understanding how blood stem cells are created and maintained — both in the body and in the laboratory.

The findings may lead to the creation of a new source of life-saving blood-forming stem cells, which could help people with a wide range of blood diseases by reducing many of the risks of bone marrow transplants. Thousands of people each year in the U.S. alone are diagnosed with diseases that could be treated with the procedure. 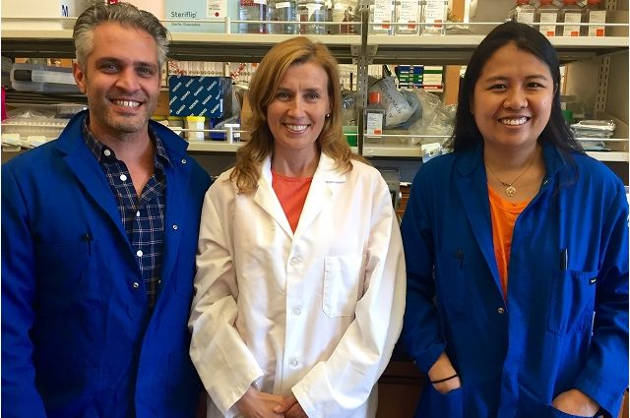 Vincenzo Calvanese, Dr. Hanna Mikkola and Diana Dou are working toward being able to create hematopoietic stem cells in the lab so that they are a perfect match for transplant recipients. Image credit: UCLA Broad Stem Cell Research Center

For decades, doctors have used bone marrow transplants to treat people with diseases of the blood or immune system. One complicating factor has always been that certain proteins in the donor’s and recipient’s cells must match so that the donor’s immune system doesn’t reject the transplant. But finding a perfect match can be difficult, and the process is risky for both donors and recipients.

The UCLA research could provide a way to create patient-specific hematopoietic stem cells, which would reduce some of the challenges associated with bone marrow transplants.

The researchers’ next challenge was to pinpoint the naturally occurring process that activates HOXA genes, so they could try to replicate the process in the lab. They found that mimicking the effects of retinoic acid, a compound derived from vitamin A, acts like a switch that turns on the HOXA genes during the development of hematopoietic stem cells.

“Inducing retinoic acid activity at a very specific time in cell development makes our lab-created cells more similar to the real hematopoietic stem cells found in the body,” said Dou, a graduate student in Mikkola’s lab. “This is an important step forward as we work to develop hematopoietic stem cells for transplantation therapies for life-threatening blood diseases.”

The research was supported by grants from the California Institute for Regenerative Medicine, the National Institutes of Health (RO1 DK100959, P01 GM081621, PO1 HL073104 and HL086345), the National Science Foundation Graduate Research Fellowship Program, the Leukemia and Lymphoma Society, and the UCLA Broad Stem Cell Research Center and its training programs, which are supported in part by the Shaffer Family Foundation and the Rose Hills Foundation.