Turmoil has long existed in the Middle East. Now, one University of Delaware faculty member is doing his part to help bring about peace as part of an intrepid music project.

Harvey Price, associate professor of music, is using his connections and knowledge to form a steel drum band in Israel comprising both Jewish and Arab children. Jews and Arabs in the region have long distrusted each other, and Israel, a Jewish nation surrounded by wary Arab countries, has undergone strife since its inception in 1948.

As he had previously been to Israel and had friends and family in that nation, Price planned to work with children of various backgrounds there. He selected the steel drum because it is, in his words, a “value-neutral” instrument, one that originated in the Caribbean and thus has no ties to Jews, Muslims, or Christians. However, the grant proposal was rejected.

Price then began putting a similar band idea in action, this time with Ethiopian immigrants to Israel.

“There’s a large Ethiopian community in Israel,” Price said. “They are refugees and they have a lot of social issues coming from there.” 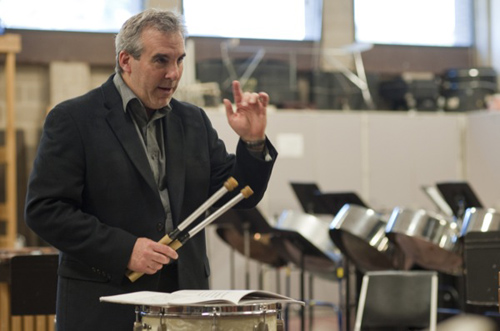 UD’s Harvey Price is using the steel drum to help bring together Jewish and Arab schoolchildren in Israel. Photo by Kathy F. Atkinson

In 2011, friends in Wilmington with the group Delaware Churches for Middle East Peace contacted Price, having heard about his 2003 steel drum proposal. The group was interested and decided to sponsor the endeavor.

Price originally hoped to have Palestinian and Israeli children work together but discounted this idea due to the difficult nature of having the children be required to cross the border between Palestine and Israel on a daily basis. He then decided to work with Jews and Arab Muslims and Christians in Israel.

“It is maybe one of the few regions in the Middle East that hopefully we can solve some of the conflict that’s inherent there,” he said. “It’s a difficult conflict because it goes back such a long time, but I think it’s the most solvable conflict from the base point, because you do have access. I probably wouldn’t want to try this in Iraq. I wouldn’t feel safe on the ground there. But I feel like there’s a free flow of information in Israel and you can directly get to the people without having to go through governments.”

With a goal firmly in mind, Price and the organization set about looking for Jewish and Arab partners with which to work. Delaware Churches for Middle East Peace officials already knew of a potential partner in the Galilee region in the north of Israel — a school where Jews, Muslims and Christians are all educated together.

Administrators at the school were intrigued, and Price and company soon found a nearby music conservatory of Jewish students. Because neither side was knowledgeable about steel drums, Price traveled to Israel in the summer of 2012, bringing with him videos of the instrument. After that, the plan was a go.

The cost would be approximately $100,000, which would be used to purchase and ship the instruments among other things. To date, about half of that has been raised. Once the remaining $50,000 has been scrounged up, the band will be complete, and more instruments can be bought, allowing for more children in the band.

The band’s 10 students, who are in junior high school, have been selected, and though Price has not met yet them, he will be flying to Israel on Oct. 20. Ten steel drums will come with him, flying over on the airplane to Israel as luggage. From there, the drums will be transported to the conservatory where Price will teach the students how to play the steel drum while Arab and Jewish music teachers observe. Once Price departs after a week, the music teachers will continue schooling the children.

Eventually, Price and the other leaders hope to bring the children to the United States to show them steel bands around Delaware. Traveling brings children together, Price said, and he believes the experience of having Arab and Jewish students working toward a common goal will help bring out the similarities and show the children they are ultimately alike.

Price said he has heard of similar projects that aim to bring people of different backgrounds together and cited a circus in Israel where Arab and Jewish children perform together.

He said he hopes this band can have a positive effect on not just the children who will be involved, but also the adults in the region.

“Most people at the heart just want to live a life,” he said. “They don’t want to rule over other people.”