Robert J. Shiller, the Sterling Professor of Economics at Yale University, has been awarded a Nobel Prize in Economic Sciences. He shares the award — formally, the 2013 Sveriges Riksbank Prize in Economic Sciences in Memory of Alfred Nobel — with Eugene F. Fama and Lars Peter Hansen from the University of Chicago. According to the Nobel committee, the three were honored “for their empirical analysis of asset prices.”

Shiller, whose name became a household word with the wide use of the Case-Shiller Home Price real estate Index, came to national prominence with the publication in 2000 of “Irrational Exuberance.” The book, which quickly became a bestseller, described speculative bubbles fueled by mass misinformation and herd instinct, and accurately predicted the dot.com implosion. As early as 2003, Shiller warned of the housing market collapse, and later wrote a precept for recovery, “Subprime Solution: How the Global Financial Crisis Happened and What to Do about It.”

“This is a fitting distinction for Bob Shiller, and a spectacular day for Yale,” says Yale University President Peter Salovey. “The recognition of Jim Rothman last week and Bob’s recognition today are bookends for an inspiring week at our university. Bob’s research on markets has always been unique: a creative combination of rigorous analysis of market performance and the exploration of the less predictable outcomes of human behavior. As a social psychologist, I am especially thrilled by the way Bob’s work integrates ideas and findings from my field into fundamental principles of market economics. I’m delighted for Bob and for his colleagues in the Yale Department of Economics and the Yale School of Management.” 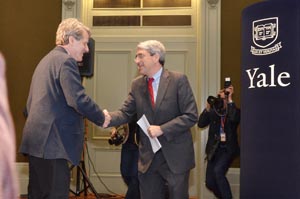 According to Shiller, “I’m grateful to the Nobel committee for this honor. Many of the problems that beset financial markets — and that are behind the financial crisis of the last five years — can be fixed, with the application of our improved understanding of asset pricing. Despite problems, our financial markets do serve people and can serve them better in the future.”

Shiller made his indelible mark as an economist with an article in the June 1981 edition of the American Economic Review, in which he questioned the “efficient markets hypothesis,” which holds that stock market prices are driven by the rational expectations of investors. The article — titled “Do Stock Prices Move Too Much to Be Justified by Subsequent Changes in Dividends?” — was named one of the “top 20” articles in the 100-year history of the American Economic Review, one of the most respected journals in its field.

Born in Detroit in 1946, Shiller received his B.A. from the University of Michigan in 1967 and Ph.D. from MIT in 1972. He held academic appointments at the University of Minnesota, MIT, and the University of Pennsylvania before joining the Yale faculty in 1982. At Yale, Shiller is affiliated with the Cowles Foundation for Research in Economics and is a fellow at the International Center for Finance at the Yale School of Management. He holds a joint appointment as a professor of finance at the School of Management, and previously served as the Arthur M. Okun Professor of Economics.

A major voice for behavioral economics, which brings human psychology into the study of finance, Shiller is the author of “Irrational Exuberance” — an explanation and analysis of speculative bubbles, with special reference to the stock market and real estate — which won the 2000 Commonfund Prize for Best Contribution to Endowment Management Research. In 2009 he co-authored, with Nobel Prize winner George Akerlof, “Animal Spirits: How Human Psychology Drives the Economy and Why It Matters for Global Capitalism,” which received the getAbstract International Book Award and the TIAA-CREF Paul A. Samuelson Award for Outstanding Scholarly Writing on Lifelong Financial Security. His latest book, “Finance and the Good Society,” published in 2012, won the Prose Award for Business, Finance, and Management.

The Yale economist has been a research associate at the National Bureau of Economic Research since 1980, and has been co-organizer of its workshops on behavioral finance (with Richard Thaler since 1991), and on macroeconomics and individual decision-making, behavioral macroeconomics (with George Akerlof since 1994).

Shiller is consistently ranked among the most influential economists of our times. In a special 2011 issue of Bloomberg Markets magazine, he was named one of the “50 Most Influential People with the Power in Global Finance,” and in 2010, he was named by Foreign Policy magazine to its list of top global thinkers. The German newspaper Die Zeit cited Shiller as one of 21 thinkers for the 21st century. In 2009 the economist was awarded the Deutsche Bank Prize in Financial Economics for his pioneering research in the field of financial economics, relating to such asset prices as fixed income, equities, and real estate. Shiller recently received the CME Group-MSRI Prize in Innovative Quantitative Applications for 2012.

He is the author of countless articles and papers in academic journals and general interest and financial publications. He writes a regular column titled “Finance in the 21st Century” for Project Syndicate, which publishes internationally, and “Economic View” for The New York Times.