A computer model that can identify the best molecular candidates for removing carbon dioxide, molecular nitrogen and other greenhouse gases from power plant flues has been developed by researchers with the U.S. Department of Energy (DOE)’s Lawrence Berkeley National Laboratory (Berkeley Lab), the University of California (UC) Berkeley and the University of Minnesota. The model is the first computational method to provide accurate simulations of the interactions between flue gases and a special variety of the gas-capturing molecular systems known as metal-organic frameworks (MOFs). It should greatly accelerate the search for new low-cost and efficient ways to burn coal without exacerbating global climate change.

Berend Smit, an international authority on molecular simulations who holds joint appointments with Berkeley Lab’s Materials Sciences Division and UC Berkeley where he directs Berkeley’s Energy Frontier Research Center, co-led the development of this computational model with Laura Gagliardi, a chemistry professor at the University of Minnesota.

“We’ve developed a novel computational methodology that yields accurate force fields – parameters describing the potential energy of a molecular system – to correctly predict the adsorption of carbon dioxide and molecular nitrogen by MOFs with open metal sites,” Smit says. “All previous attempts at developing such a methodology failed and most people gave up trying, but our model is applicable to a broad range of systems and can be used to predict properties of open-site MOFs that have not yet been synthesized.” 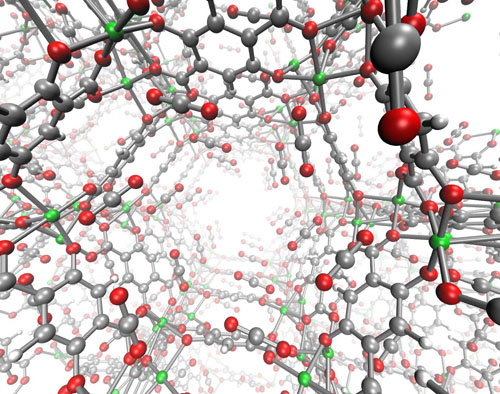 Open-metal site MOFs are crystalline molecular systems that can serve as storage vessels with a sponge-like capacity for capturing and containing carbon dioxide and other flue gases before they enter the atmosphere. (Image courtesy of Berend Smit)

Given that the United States holds the world’s largest estimated recoverable reserves of coal, coal-burning power plants will continue to be a major source of our nation’s electricity generation for the foreseeable future. However, given rising concerns over the contributions of burning coal to global climate change, there is an urgent need for an effective and economical means of removing greenhouse gases from flues before those gases enter the atmosphere. Current technologies proposed for capturing greenhouse gas emissions, based on amines or other molecular systems, would use about one-third of the energy generated by the power plants. This “parasitic energy” would substantially drive up the price of electricity.

MOFs are crystalline molecular systems that can serve as storage vessels with a sponge-like capacity for capturing and containing carbon dioxide and other gases. MOFs consist of a metal oxide center surrounded by organic “linker” molecules to form a highly porous three-dimensional crystal framework. When a solvent molecule is applied during the formation of the MOF and is subsequently removed, the result is an unsaturated “open” metal site MOF that has an especially strong affinity for carbon dioxide.

“MOFs have an extremely large internal surface area and, compared to other common adsorbents, promise very specific customization of their chemistry and could dramatically lower parasitic energy costs in coal-burning power plants,” Smit says. “However, there are potentially millions of variations of MOFs and since from a practical standpoint we can only synthesize a very small fraction of these materials, the search for the right ones could take years. Our model saves this time by enabling us to synthesize only those that are most ideal.” 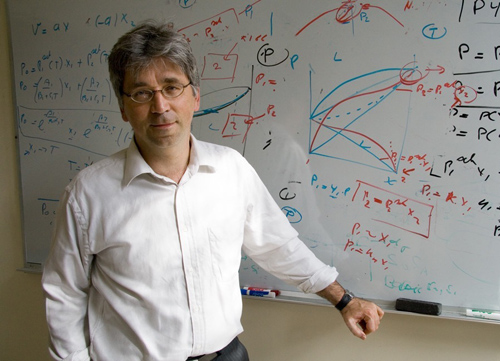 Force field models developed to predict the adsorption properties of other MOFs typically underestimate the properties for open metal site MOFs by two orders of magnitude. This is because open metal site MOFs impose very different chemical environments from the MOFs that were considered in the original development of force field models. Smit and his colleagues met the challenge of open site MOFs using state-of-the-art quantum chemical calculations and a strategy based on the non-empirical model potential (NEMO) methodology.

“Under this NEMO methodology, the total electronic interaction energy obtained from quantum chemical calculations is decomposed into various contributing factors, such as electrostatic, repulsive, dispersion and so on,” Smit says. “With the model we developed we were able to reproduce the experimental adsorption isotherms of carbon dioxide and molecular nitrogen and correctly predict the mixture isotherms at flue-gas conditions in Mg-MOF-74, an open metal site MOF that has emerged as one of the most promising for carbon dioxide capture.”

The generality of their methodology should enable Smit and his colleagues to develop force field models for broad combinations of different metals, linkers and topologies. Work is already underway to apply the model to new amine-based systems for removing carbon dioxide from flue exhaust.

This research was supported by DOE’s Office of Science in part through the Center for Gas Separations, an Energy Frontier Research Center, and the by DOE’s Advanced Research Projects Agency-Energy (ARPA-E), and by the Deutsche Forschungsgemeinschaft. Researchers made use of Berkeley Lab’s National Energy Research Scientific Computing Center and Molecular Foundry, facilities that are also supported by the DOE Office of Science.