Some birds come first — a new approach to species conservation

A Yale-led research team has developed a new approach to species conservation that prioritizes genetic and geographic rarity and applies it to all 9,993 known bird species.

“To date, conservation has emphasized the number of species, treating all species as equal,” said Walter Jetz, the Yale evolutionary biologist who is lead author of a paper published April 10 in Current Biology. “But not all species are equal in their genetic or geographic rarity. We provide a framework for how such species information could be used for prioritizing conservation.”

Worldwide, nearly 600 species of birds are currently in danger of becoming extinct as the result of human development pressures and environmental changes. Conserving genetically distinct and threatened species is especially challenging, Jetz said, because many of these are far from species-rich areas that are already being protected

Jetz and his team confront this problem by applying a criterion called evolutionary distinctiveness, a quantitative measure of genetic or evolutionary uniqueness. This metric helps conservationists prioritize which birds most deserve attention. 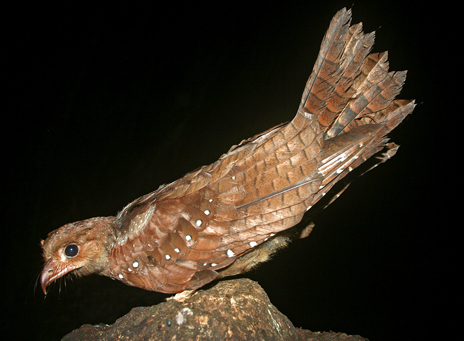 The Oilbird is the top-ranked evolutionarily distinct bird species, with almost 80 million years of evolutionary history unique to it. Photo courtesy of Walter Jetz

The researchers mapped the geographic ranges of all 9,993 species of living birds and applied evolutionary distinctiveness ratings to them. The results revealed areas where maximum conservation of bird diversity can be achieved with minimal investment, according to researchers. Among the targeted areas for future conservation are regions of Australia, Indonesia, Brazil, and Madagascar.

Conservationists are already taking notice of the new approach.

The Zoological Society of London’s (ZSL) EDGE of existence program focuses on conservation of evolutionarily unique species, such as those identified in the paper. The new quantitative methods for identifying unique species at risk have provided the EDGE of existence program a stronger framework for its fundraising and avian conservation efforts, according to Jetz and co-author Arne Mooers of Simon Fraser University, who have worked closely with ZSL for the last five years.

Mapping avian conservation has been an ongoing project for Jetz, who is leading the Map of Life Project. The project integrates up-to-date information about species distributions and provides range maps for evolutionarily distinct species.

“In addition to targeted conservation, better monitoring of species’ changing distributions is vital, and geographical conservation priorities can be effectively adjusted to better conserve the tree of life and the many important functions it provides,” he said.

While Jetz’s research group at Yale aims to expand this work to other vertebrates, he hopes that other scientists follow his lead to combine quantitative genetic and geographic information for maximally effective and minimally expensive conservation of the world’s animals or plants.

“It is a reality that society is unwilling or unable to protect every single species into the future, so it would make sense to identify and potentially prioritize the most irreplaceable species over others,” he said.