Somali pirates released a hijacked German-owned chemical tanker and its crew of 22 on Tuesday. But the release came at a price-$5.5 million was paid in ransom, Andrew Mwangura of the East African Seafarers Assistance program told.

The 13,000-ton MV Marida Marguerite was hijacked on the morning of May 8, 120 nautical miles south of Salalah, Oman, according to The Epoch Times. 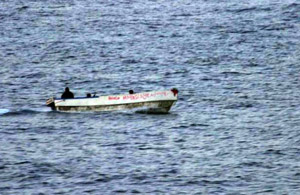 An armed suspected pirate looks over the edge of a skiff, in international waters off the coast of Somalia. USS Cape St. George (CG 71) and USS Gonzalez (DDG 66) prepared to board the suspicious vessel. The vessel’s crew members opened fire on the U.S. Navy ships and the ship's crew members returned fire. One suspect was killed and 12 were taken into custody. Date: 18 March 2006. Credit: U.S. Navy

On Monday, pirates seized another German-owned ship, the Ems River. The cargo ship was on its way to Greece from Dubai at the time of the attack.

The Somali pirates are currently holding 25 vessels and 587 hostages. Somalia has not had a functioning government since 1991, when warlords overthrew former dictator Mohamed Siad Barre.

Since that time, pirate attacks have become a common occurrence in the Indian Ocean off the coast of Somalia, despite the presence of warships protecting cargo ships in the sea lanes, according to Press TV.