EAST LANSING, Mich. — In a head-to-head battle of harvesting the sun’s energy, solar cells beat plants, according to a new paper in Science. But scientists think they can even up the playing field, says Michigan State University researcher David Kramer.

Plants are less efficient at capturing the energy in sunlight than solar cells mostly because they have too much evolutionary baggage. Plants have to power a living thing, whereas solar cells only have to send electricity down a wire. This is a big difference because if photosynthesis makes a mistake, it makes toxic byproducts that kill the organism. Photosynthesis has to be conservative to avoid killing the organisms it powers.

“This is critical since it’s the process that powers all of life in our ecosystem,” said Kramer, a Hannah Distinguished Professor of Photosynthesis and Bioenergetics. “The efficiency of photosynthesis, and our ability to improve it, is critical to whether the entire biofuels industry is viable.” 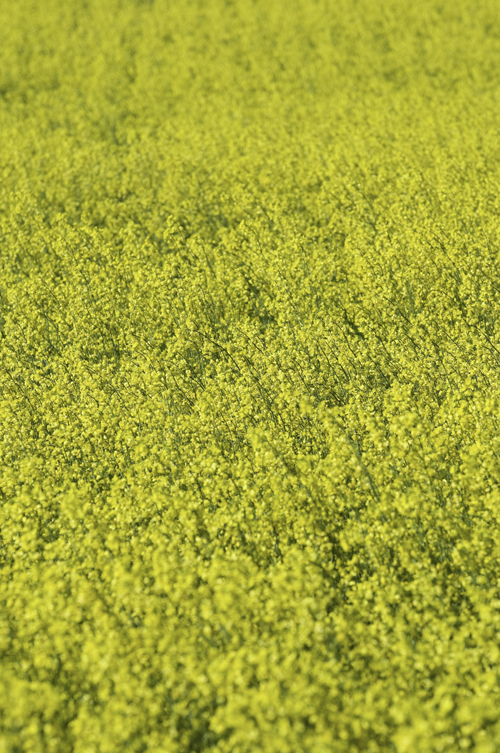 Scientists want to increase the efficiency of photosynthesis of plants like canola to help increase biofuel's viability. Photo by G.L. Kohuth.

While photosynthesis is less efficient on a pure energy basis, it has the advantage of producing high-energy liquid fuels. (It also makes all of our food, and is thus essential for life). The paper summarizes several specific approaches to improving photosynthesis, some likely achievable in the short term, some more involved.

In truth, the competition really isn’t fair unless the term “efficiency” is first defined. At a bare minimum it isn’t fair to compare plants that package the sun’s energy in handy little stored-fuel vessels (carbon-based molecules) to solar cells that just take the first step of converting the sun’s energy to jazzed-up electrons. Fairer would be to compare plants to solar cell arrays that also store energy in chemical bonds.

The point of the comparison is not to make us throw plants on the compost pile, the researchers said. For one, efficiency is only one consideration among many in the choice among energy technologies. More important are life-cycle costs, the capital cost and valuation of the environmental impact of a product from its creation to its destruction.

Still the comparison is useful because it’s leading the exploration of why plants are so inefficient and what can be done to improve their efficiency. Genetic engineering and the more aggressive techniques of synthetic biology – the marriage of biology and engineering to design and construct systems and metabolic pathways not found in nature – could speed things up considerably.

The experts suggested, for example, replacing one of the two photosystems in plants that handle the light-dependent reactions with a photosystem from a species of cyanobacteria. The photosystems in most plants compete for the same piece of the solar spectrum, cutting the energy efficiency nearly in half. But some cyanobacteria absorb light from an entirely different part of the spectrum. Basically, it would be the biological equivalent of a tandem solar cell, which is very efficient.

Kramer, who works in the MSU-Department of Energy Plant Research Laboratory, was part of a team of researchers led by Washington University in St. Louis.