Eve L. Ewing, an assistant professor at the University of Chicago’s School of Social Service Administration, brings to life a superhero from Chicago’s South Side in the new Marvel comic Ironheart, which debuts Nov 28.

Ewing, AB’08, is the author of the solo series debut of Ironheart—the alter ego of Riri Williams, a black teenage genius from the South Side. Comic fans were first introduced to her in Marvel’s Invincible Iron Man, in which Williams reverse-engineers one of Tony Stark’s Iron Man suits. 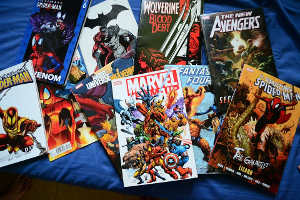 “Ironheart symbolizes what happens when you combine incredible strength and might with a sense of love, care and a true desire for justice,” said Ewing in an interview with Marvel.com earlier this year. “Not just punishment or showing off or short-term solutions, but real justice. Not to be corny or overly literal, but that’s what it means to combine the power represented by ‘iron’ with the moral compass represented by ‘heart.’”

In Ironheart #1 from Ewing and artists Kevin Libranda and Luciano Vecchio, readers get a deeper backstory of Williams. This includes Ewing, who is a Chicago native, sketching out a clearer picture of the character’s life on the South Side: Williams hails from the South Shore neighborhood and attends King College Prep.

“In everything I write, I always try to illuminate a strong sense of place,” Ewing told Marvel.com. “It’s been really fun to bring out little details of those places. Shouting out Chicago in particular is pretty much my favorite thing.”

A qualitative sociologist of education at SSA, Ewing’s research focuses on racism, social inequality and urban policy, and the impact of these forces on American public schools and the lives of young people. She is the author of Ghosts in the Schoolyard: Racism and School Closings on Chicago’s South Side, which was published in October by the University of Chicago Press. The book examines the 2013 school closings in Chicago.

Ewing also released a collection of poetry titled Electric Arches last year and is the host of Bughouse Square with Eve Ewing, a WFMT podcast series inspired by the audio archives of Studs Terkel.