How do hair follicles grow? A Yale-led study untangles the science

An outstanding question in dermatology that researchers have studied for decades is: How do hair follicles emerge from a sea of seemingly uniform skin cells during embryonic development? New research findings from a Yale-led team offer answers to that question, which may lead to strategies for regenerating lost hair follicles in adults.

To gain insight into early hair follicle development, the research team combined the study of genetically engineered mouse models with single-cell RNA methods to examine the molecular and cellular events that occur prior to visible evidence of hair follicle formation — a process that was nearly impossible to decode by conventional methods. 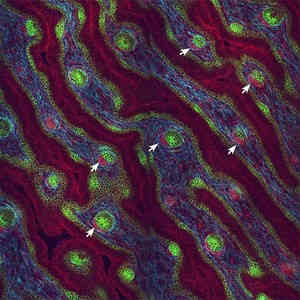 Using this combined approach, the research team was able to predict and validate key molecular changes that occur within a subpopulation of dermal progenitor cells as they differentiate and mature into cells uniquely capable of inducing hair follicles. The scientists found that these dermal progenitor cells can be found spatially within a specific reservoir just peripheral to the forming hair follicle. In their study, they identified a cell signaling pathway that controls this differentiation process and the induction of hair follicles. By modulating this signal in mice, they were able to regulate hair follicle size during the early skin development.

Although several questions remain, the findings give researchers clues that can be utilized to potentially stimulate skin to regenerate hair follicles that have been lost, said senior author Peggy Myung, assistant professor of dermatology. “The hair follicles you have as an adult are the ones you were born with, and hair follicles that are lost by injury or inflammation generally cannot be recovered,” she said. But with this study, Myung said, she and her team now have a molecular handle to begin to determine the signals that can instruct adult skin cells to regenerate what was lost. It also provides a paradigm to elucidate how other appendages that follow similar mechanisms of development, such as teeth, first emerge and grow, she said.

Read the full paper in the journal Developmental Cell.