Researchers at the University of Delaware have developed a “smart” hydrogel that can deliver medicine on demand, in response to mechanical force.

Over the past few decades, smart hydrogels have been created that respond to pH, temperature, DNA, light and other stimuli.

“The idea of a smart hydrogel that can release medicine over time is not new,” said Xinqiao Jia, UD professor of materials science and engineering and biomedical engineering. “What’s new is our ability to have medicine released in response to force — a major challenge for people with osteoarthritis and other ‘wear and tear’ injuries that compromise a person’s ability to perform everyday activities.”

Osteoarthritis is a chronic condition that affects nearly 27 million Americans, according to the Arthritis Foundation. It is characterized by soreness or stiffness in joints following inactivity or overuse, and pain that worsens after activity or as the day progresses. 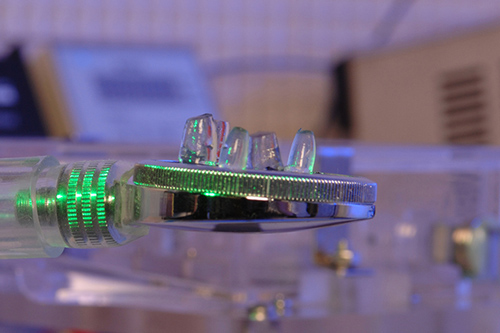 UD researchers have developed a “smart” gel that can deliver medicine on demand in response to force. Photo by Kathy F. Atkinson

The researchers believe the hyaluronic acid-based hydrogels developed at UD can be injected into an injury site — such as a knee or hip joint — and that as a patient walks or participates in therapeutic exercise, the walking motion will cause accelerated release of the drug, reducing inflammation and pain.

Testing under laboratory conditions has confirmed that as the UD-developed hydrogel is compressed, the encapsulated drugs are discharged into the surrounding environment. Preliminary cell testing confirmed the anti-inflammatory activity of the released drug molecules.

Now the team is collaborating with colleagues at Rush University in Chicago to test the hydrogels in animal models. Early results indicate that the gel is biocompatible, which Jia said is because hyaluronic acid is a naturally occurring substance in cartilage, making it more readily accepted in the body.

She also said the hydrogel could help with a variety of conditions beyond osteoarthritis, including ligament tears or other injury areas under high tension.

“I have even considered whether we can leverage this hydrogel platform to reduce inflammation in patients with vocal fold disorders,” Jia said. 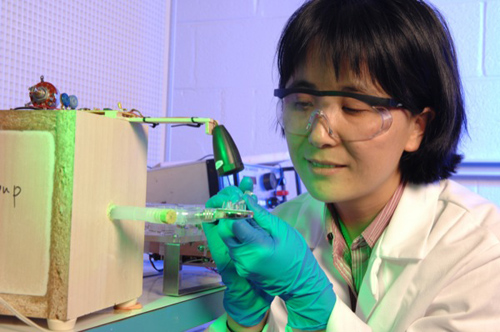 UD researchers, led by Xinqiao Jia, have developed a “smart” gel that can deliver medicine on demand in response to force. Photo by Kathy F. Atkinson

UD collaborators on the project include Darrin Pochan, professor of materials science and engineering; Chandran Sabanayagam, an associate scientist at the Delaware Biotechnology Institute; and Longxi Xiao and Zhixiang Tong, Jia’s former students, and Yingchao Chen, a current student.

An expert in microscopy and characterization techniques, Sabanayagam’s role was to understand exactly how the gels behave under mechanical force and how the drug diffuses under pressure — important considerations in treatment efficacy.

The research team is now investigating whether future iterations of the hydrogel can be imbued with properties that would stimulate tissue regeneration and repair.

The work is funded through the National Science Foundation, National Institutes of Health and the state of Delaware.

The researchers published their findings in Biomacromolecules, a publication of the American Chemical Society (ACS).