ANN ARBOR, Mich.— In a step toward more efficient, smaller and higher-definition display screens, a University of Michigan professor has developed a new type of color filter made of nano-thin sheets of metal with precisely spaced gratings.

The gratings, sliced into metal-dielectric-metal stacks, act as resonators. They trap and transmit light of a particular color, or wavelength, said Jay Guo, an associate professor in the Department of Electrical Engineering and Computer Science. A dielectric is a material that does not conduct electricity.

“Simply by changing the space between the slits, we can generate different colors,” Guo said. “Through nanostructuring, we can render white light any color.”

A paper on the research is published Aug. 24 in Nature Communications.

His team used this technique to make what they believes is the smallest color U-M logo. At about 12-by-9 microns, it’s about 1/6 the width of a human hair.

Conventional LCDs, or liquid crystal displays, are inefficient and manufacturing-intensive to produce. Only about 5 percent of their back-light travels through them and reaches our eyes, Guo said. They contain two layers of polarizers, a color filter sheet, and two layers of electrode-laced glass in addition to the liquid crystal layer. Chemical colorants for red, green and blue pixel components must be patterned in different regions on the screen in separate steps. 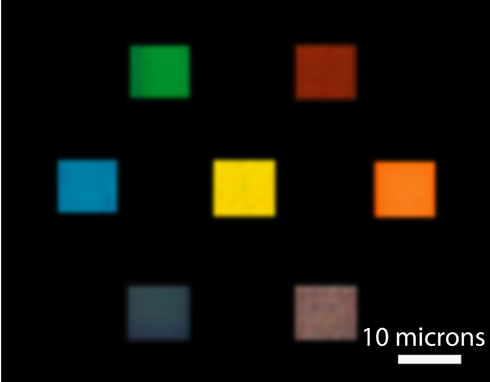 About the image: An optical microscopy image of a 12-by-9-micron U-M logo produced with this new color filter process. Image credit: Jay Guo

Guo’s color filter acts as a polarizer simultaneously, eliminating the need for additional polarizer layers. In Guo’s displays, reflected light could be recycled to save much of the light that would otherwise be wasted.

Because these new displays contain fewer layers, they would be simpler to manufacture, Guo said. The new color filters contain just three layers: two metal sheets sandwiching a dielectric. Red, green and blue pixel components could be made in one step by cutting arrays of slits in the stack. This structure is also more robust and can endure higher- powered light.

“Amazingly, we found that even a few slits can already produce well-defined color, which shows its potential for extremely high-resolution display and spectral imaging,” Guo said.

The pixels in Guo’s displays are about an order of magnitude smaller than those on a typical computer screen. They’re about eight times smaller than the pixels on the iPhone 4, which are about 78 microns. He envisions that this pixel size could make this technology useful in projection displays, as well as wearable, bendable or extremely compact displays.

Guo is also an associate professor in the Department of Macromolecular Science and Engineering. This research is supported in part by the Air Force Office of Scientific Research and the Defense Advanced Research Projects Agency. The university is pursuing patent protection for the intellectual property and is seeking commercialization partners to help bring the technology to market.