Technologies for using laser energy to destroy threats at a distance have been in development for many years. Today, these technologies — known as directed energy weapons — are maturing to the point of becoming deployable.

High-energy lasers — one type of directed energy weapon — can be mounted on aircraft to deliver a large amount of energy to a far-away target at the speed of light, resulting in structural and incendiary damage. These lasers can be powerful enough to destroy cruise missiles, artillery projectiles, rockets and mortar rounds.

Before these weapons can be used in the field, the lasers must be tested and evaluated at test ranges. The power and energy distribution of the high-energy laser beam must be accurately measured on a target board, with high spatial and temporal resolution.

Researchers at the Georgia Tech Research Institute (GTRI) have developed a system to measure a laser’s power and spatial energy distribution simultaneously by directing the laser beam onto a glass target board they designed. Ultimately, the reusable target board and beam diagnostic system will help accelerate the development of such high-energy laser systems and reduce the time required to make them operational for national security purposes. 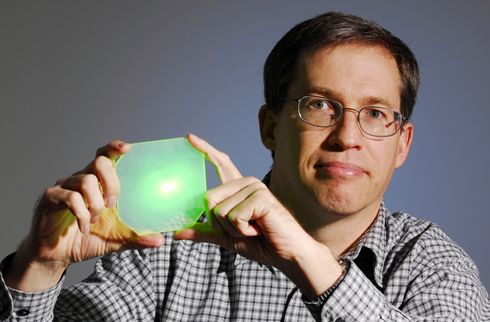 “The high-energy laser beam delivers its energy to a small spot on the target — only a couple inches in diameter — but the intensity is strong enough to melt steel,” said GTRI senior research scientist David Roberts. “Our goal was to develop a method for determining how many watts of energy were hitting that area and how the energy distribution changed over time so that the lasers can be optimized.”

GTRI teamed with Leon Glebov of Orlando-based OptiGrate to design and fabricate a target board that could survive high-energy laser irradiation without changing its properties or significantly affecting the beam. The researchers selected OptiGrate’s handmade photo-thermo-refractive glass — a sodium-zinc-aluminum-silicate glass doped with silver, cerium and fluorine — for the target board.

“This glass is unique in that it is transparent, but also photosensitive like film so you can record holograms and other optical structures in the glass, then ‘develop’ them in a furnace,” explained Roberts.

The researchers tweaked the optical characteristics of the glass so that the board would resist degradation and laser damage. OptiGrate also had to create a new mold to produce four-inch by four-inch pieces of the glass — a size four times larger than OptiGrate had ever made before.

During testing, the four-inch-square target board is secured between a test target and a high-energy laser, and the beam irradiance profile on the board is imaged by a remote camera. The images are then analyzed to provide a contour map showing the power density — watts per square inch — at every location where the beam hit the target.

“We can also simultaneously collect power measurements as a function of time with no extra equipment,” noted Roberts. “Previously, measuring the total energy delivered by the laser required a ball calorimeter and temperature measurements had to be collected as the laser heated the interior of the ball. Now we can measure the total energy along with the total power and power density anywhere inside the beam more than one hundred times per second.”

GTRI’s prototype target boards and a high-energy laser beam profiling system that uses those boards were delivered to Kirtland Air Force Base’s Laser Effects Test Facility in May. The researchers successfully demonstrated them using the facility’s 50-kilowatt fiber laser and measured power densities as high as 10,000 watts per square centimeter without damaging the beam profiler.

Scaling the system up to larger target board sizes is possible, according to Roberts.