West Glacier, Mont. – Two rare alpine insects – native to the northern Rocky Mountains and dependent on cold waters of glacier and snowmelt-fed alpine streams – are imperiled due to climate warming induced glacier and snow loss according to a study by the U.S. Geological Survey and its partners.

The 20-year study provides the first comprehensive evaluation of the current status, distribution and habitat requirements for each species and was used to inform the status review for consideration of protection under the U.S. Endangered Species Act due to climate-change-induced habitat loss.

Researchers found the meltwater stonefly and western glacier stonefly have a narrow distribution and are restricted to short sections of cold, alpine streams often below glaciers predicted to disappear over the next two decades.

“Alpine aquatic insects living in glacier and snow-fed streams are adapted to very cold water temperatures and are therefore especially vulnerable to warming and snow and ice loss,” said Joe Giersch, USGS entomologist and lead author of the study. “Although this research is focused on two insect species, our findings apply to entire communities of alpine stream organisms, the survival of which depends on the presence of permanent ice and snow feeding the streams in which they live.” 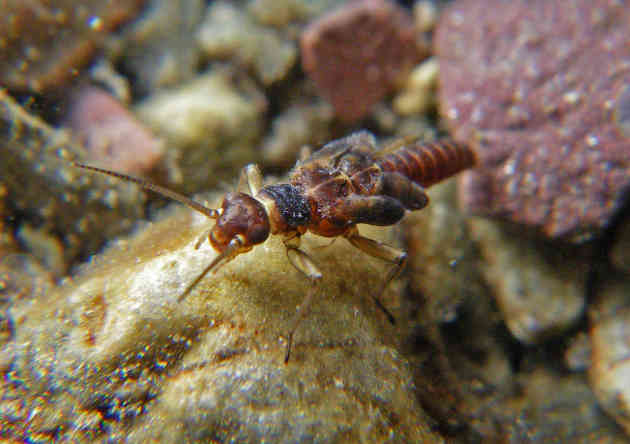 A meltwater stonefly larva (Lednia tumana) sits on a cobbled snow fed stream in Glacier National Park. The species is threatened by climate warming induced glacier and snow loss and has been petitioned for protection under the U.S. Endangered Species Act due to climate-change-induced habitat loss. Image credit: Joe Giersch, USGS

Over the duration of the study, researchers sampled 272 alpine streams in Glacier National Park, where the insects are native, and other areas outside the known distribution throughout the Rocky Mountains of Montana and Wyoming.

The meltwater stonefly was found in 113 streams within Glacier National Park and surrounding areas. The likelihood of finding the insect increased with cold stream temperatures and proximity to glaciers and permanent snowfields, and declined with increasing distance from stream source.

The western glacier stonefly was only found in 10 streams, six in Glacier National Park and four in mountain ranges almost 400 miles southwest.

Both stoneflies were present in groundwater-fed alpine springs, which may provide refuge when alpine stream conditions decline.

Alpine streams environments in the northern Rocky Mountains are especially vulnerable to climate change due to rapid warming resulting in loss of glaciers and snowpack. Glacier National Park is iconic of the combined impacts of climate change and snow and ice loss – over 80 percent of the park’s glaciers have been lost since the mid-19th century.

This study brings to light how an obscure species could be true biological sentinels of climate change because their survival is dependent on a habitat that is rapidly becoming fragmented and degraded, making it very difficult for them to adapt. The results provide a rare example linking climate-change-induced habitat loss with conservation implications for rare, understudied species.

“By clearly linking glacier decline to the loss of alpine species, we can more confidently state threats to conservation of alpine species in Glacier National Park and also extend the discussion to similar situations worldwide” said Scott Hotaling, doctoral candidate at the University of Kentucky and co-author of the study.

“These stoneflies are retreating up the mountain to seek out cold water, but there is nowhere to go because they’re literally at the top of the continent” says Clint Muhlfeld, USGS ecologist and study co-author. “Global warming-induced glacier and snow loss not only threatens some species with extinction, but also has far-reaching effects on regional and global biodiversity.”