Skip the Junk Food and Dig into Some Healthy Summer Eating

Summer is traditionally the time for burgers and hot dogs fresh from the grill, fried chicken and cakes from church picnics, and funnel cakes, corn dogs, and ice cream from county and state fairs. While that all sounds delicious, consider how unhealthy a lot of that food is. A six-ounce corn dog served at a state fair has around 320 calories, is full of sodium, and has little dietary fiber. A funnel cake has around 760 calories, and a grilled hamburger patty calorie count can range from 220 to 307 calories, and that’s without the grilled buttered bun, a melted slice of cheese, and all the condiments. 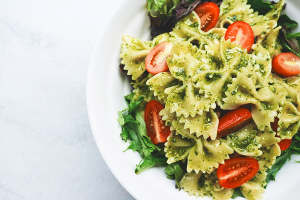 It seems ironic that during the warmest time of the year, we tend to put some of the heaviest foods into our bodies. To be sure, the occasional corn dog or burger from the grill isn’t bad, and it’s hard to imagine summer without either of them. But as you plan your family menus this summer, consider switching out some of the traditional summer foods (and habits) with lighter ones described below. Not only will you be cutting back on your calorie intake, you’ll be taking in some of the true, tangy, refreshing flavors of summer.

Instead of grilling burgers, you could instead grill large porcini mushroom caps. Roni Caryl Rabin of The New York Times states that mushrooms are low in calories and fat and are packed full of nutrients, plus they’re high in antioxidants. And instead of serving them on buns, use toasted English muffins. Another grilling alternative is salmon or trout instead of red meat. You can also cook these indoors as well. For those who like French fries, grill some potato wedges, which you can slice from large baking potatoes. Just season them with butter and some garlic or other herbs. They cook quickly and are low in calories, plus they’re fun to eat and nutritious for the kids (and adults!).

Traditional summer foods tend to lean heavily toward bread and breading. There are alternatives, however. If your family loves tacos, swap out lettuce for the shells. For enchiladas, use cabbage leaves instead of tortillas. And, yes, you can even make a nutritious variation on the corn dog batter by using honey and baking them instead of deep-frying. Cut back on heavy breading and you can easily cut back on calories.

While it’s tempting to immediately try anything that’s deep-fried on the midway, many county and state fairs have a surprisingly nutritious option: smoked turkey legs. They are low in calories with plenty of protein. Plus, they’re normally quite large and you can get your money’s worth. The only drawback is that they might be higher in sodium. If you need a side, grab an ear of street corn, which, while higher in calories than other produce and probably slathered in butter and sour cream, is a better choice than most other fair fare.

For Your Sweet Tooth

One of the eternal symbols of summer is the ice cream cone. For your summer of light eating, why not try a parfait with plain yogurt, fresh fruit (either strawberries or raspberries), and a few pieces of dark chocolate? Yes, chocolate can easily be incorporated into a healthy eating plan. Dark chocolate is not only a tasty treat but is great for the heart, a fact that even Harvard University can’t ignore.

It’s especially important that seniors become knowledgeable of which healthy food options to eat in the summertime, since the heat, decreasing sense of taste, and age-related health problems can make it difficult to choose nutritious foods. Consider going to a farmers market and picking out some fresh seasonal produce. Freeze some fruits to make smoothies, or pair veggies with lean meats on the grill.

Stay hydrated. The food you eat isn’t the only thing you put into your body that matters. Drinking plenty of water will work wonders for your health. Further, you can increase your overall nutritional intake by adding a multivitamin to your morning routine. Even when you’re eating fresh, local produce, these fruits and veggies can be depleted of their natural nutrients thanks to over-farming. A quality multivitamin can help you maintain dietary balance.

Summertime doesn’t mean you have to give up any nutritional habits you’ve developed over the previous months. By exploring alternatives for your favorite food items on the grill, their breading, and cool sweet treats, you and your family can keep eating food that’s good for you all summer long.