Skin colour displayed amongst one species of monkey provides a key indicator of how successfully they will breed, a new study has shown.

The collaborative international research also shows that skin colouration in male and female rhesus macaques is an inherited quality – the first example of heritability for a sexually-selected trait to be described in any mammal.

The team of scientists collected more than 250 facial images of free-ranging rhesus macaques, which are native to South, Central and Southeast Asia and which display red skin colouring around the face, as well as the genital and hind-quarter areas.

Using these images and 20 years of genetic parentage data, the researchers assessed whether the variation in red ornaments influenced fecundity – that is they produced more offspring – and is heritable in male and female rhesus macaques, two necessary conditions for the trait to be considered under sexual selection. 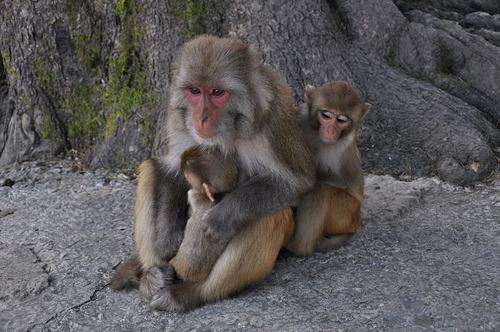 The study showed that males that were darkly coloured, as well as high ranking within the community, had higher fecundity. Skin redness amongst females was also positively linked to fecundity.

Monkeys with darker skin colouring were also more likely to produce offspring displaying the same trait. – thought to be the first demonstration of heritability of an ornament selected through mate choice, rather than fighting, in a large mammal.

Dr Lauren Brent, currently an Associate Research Fellow in the Psychology department at the University of Exeter, took part in the study. She said: “Some primates exhibit very noticeable skin colourings, in this case red, that we believe are linked to sexual success.  It is not dissimilar to plumage shown by birds – the more striking it is, the more they will be noticed by potential mates.

“What is fascinating is that we can see that the deeper red colouring that seems to be favoured in this species seems to be passed down from generation to generation, which is exciting.”

Previous studies have shown that rhesus macaque skin colouration is involved in mate selection –both males and females show interest in darker red faces displayed in the opposite sex. However, this is the first study that shows variation in skin coloration has a genetic basis and can help predict reproductive output.