Soon, protection from HIV infection could be as simple as inserting a medicated, disappearing fabric minutes before having sex.

University of Washington bioengineers have discovered a potentially faster way to deliver a topical drug that protects women from contracting HIV. Their method spins the drug into silk-like fibers that quickly dissolve when in contact with moisture, releasing higher doses of the drug than possible with other topical materials such as gels or creams.

“This could offer women a potentially more effective, discreet way to protect themselves from HIV infection by inserting the drug-loaded materials into the vagina before sex,” said Cameron Ball, a UW doctoral student in bioengineering and lead author on a paper in the August issue of Antimicrobial Agents and Chemotherapy. 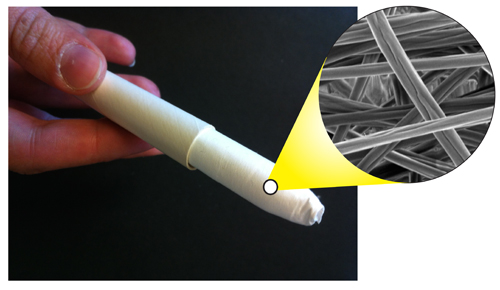 The UW’s dissolving fibers could be spun and placed within an applicator, similar to those used to insert a tampon. The inset image shows the quick-release fibers magnified 5,000 times. Image credit: U of Washington

The UW team, led by bioengineering assistant professor Kim Woodrow, previously found that electrically spun cloth could be dissolved to release drugs. These new results build upon that research, showing that the fiber materials can hold 10 times the concentration of medicine as anti-HIV gels currently under development.

Oral pills are used in the U.S. for people who are considered at risk for HIV infection, and topical medications in the form of gels and films are just starting to be developed. These products would be placed inside the vagina before sexual intercourse, allowing the drug to dissolve and diffuse into the surrounding tissue. Called microbicides, the drugs must be given as a large dose to be effective minutes before sex.

But these topical drugs haven’t done well in clinical trials, partly because they aren’t always easy for women to use. Drugs in film form take at least 15 minutes to fully dissolve in the body, and the volume of gels must be large enough to deliver a full dose but small enough to prevent leakage. These factors can make microbicides difficult for a woman to use before sex, researchers said.

“The effectiveness of an anti-HIV topical drug depends partially on high-enough dosages and quick release,” Ball said. “We have achieved higher drug loading in our material such that you wouldn’t need to insert a large amount of these fibers to deliver enough of the drug to be helpful.” 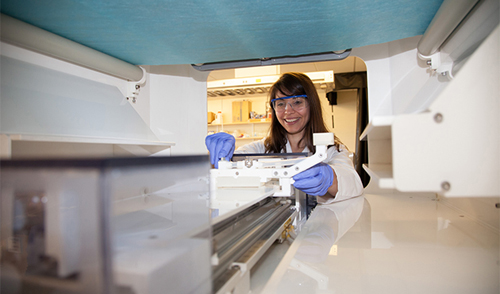 The UW team created the soft fibers using a process called electrospinning. They first dissolved a polymer and combined it with a drug, maraviroc, and other agents often used in pharmaceuticals that help a material become more water soluble and dissolve quicker. Maraviroc currently is used to treat symptoms of HIV for people who already have the virus.

The syrupy substance is then charged with a high-voltage generator and passed through a syringe. The electric charge on the substance’s surface causes it to form a long string from the syringe, where it whips around – or spins – before collecting on an electrically grounded surface. A palm-sized swatch of the fabric takes about five minutes to make. 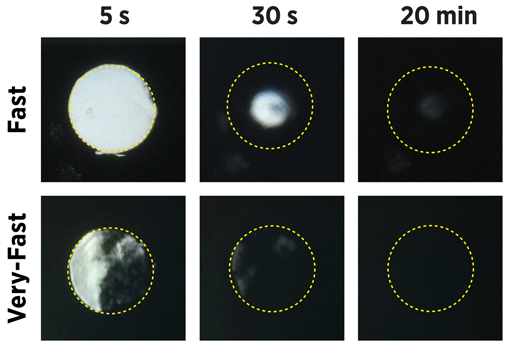 Two of the UW’s fibers (white) made of different ingredients are shown dissolving. When the materials come into contact with moisture, they rapidly hydrate and dissolve to form gels. The gel could then spread around the vagina during sex to deliver the drug. Image credit: U of Washington

Anti-HIV drugs such as maraviroc can take a while to dissolve, so the researchers looked at different ingredients for the fiber that would allow for the highest concentration of drug with the fastest-possible release in the body. Because the electrically spun fibers have a large surface area, researchers were able to create samples in which nearly 30 percent of the mass was composed of the drug itself. In topical gels, the drug makes up only about 3 percent of the total mass.

By adjusting the ingredients in the fibers, researchers were able to dissolve the drug in about six minutes, no matter how much drug mass was in the fiber.

The research team says the soft, dissolving fibers could be rolled into a cardboard tampon applicator for insertion or built into the shape of a vaginal ring, similar to those used for contraception. The material can accommodate different anti-HIV drugs and the team is testing several others for effectiveness.

“We think the fiber platform technology has the capability of being developed into multifunctional medical fabrics that address simultaneously challenges related to biological efficacy and user preferences,” Woodrow said.

Researchers are currently focused on developing prototypes based on user guidance that can be tested for safety and efficacy in animal models.

This research was funded by the National Institutes of Health.