Shape-shifting molecule tricks viruses into mutating themselves to death

A newly developed spectroscopy method is helping to clarify the poorly understood molecular process by which an anti-HIV drug induces lethal mutations in the virus’ genetic material. The findings from the University of Chicago and the Massachusetts Institute of Technology could bolster efforts to develop the next generation of anti-viral treatments.

Viruses can mutate rapidly in order to adapt to environmental pressure. This feature also helps them become resistant to anti-viral drugs. But scientists have developed therapeutic anti-viral agents for HIV, hepatitis C and influenza using a strategy called lethal mutagenesis.

This strategy seeks to extinguish viruses by forcing their already high mutation rates above an intolerable threshold. If viruses experience too many mutations, they can’t properly manage their genetic material. 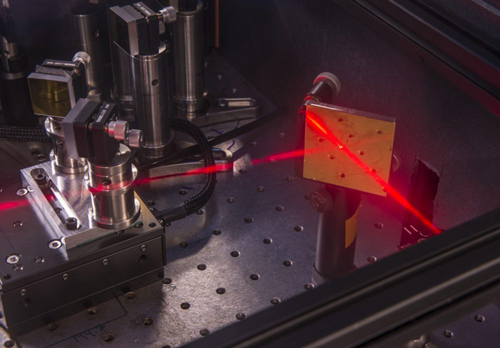 This photograph shows part of the two-dimensional infrared spectroscopy instrument operating in the laboratory of Prof. Andrei Tokmakoff. The normally invisible infrared laser beam appears red in this image with the aid of dry ice. Photo by Robert Kozloff

“They can’t replicate and so are quickly eliminated,” said Andrei Tokmakoff, the Henry G. Gale Distinguished Service Professor in Chemistry at UChicago. “In order to make this work, you need a stealth mutagen. You need something sneaky, something that the virus isn’t going to recognize as a problem.”

Tokmakoff and his associates at UChicago and MIT reported new details of the stealthy workings of the anti-HIV agent KP1212 in March in the Proceedings of the National Academy of Sciences. Supporting data were collected with two-dimensional infrared spectroscopy, an advanced laser technique that combines ultrafast time resolution with high sensitivity to chemical structure. 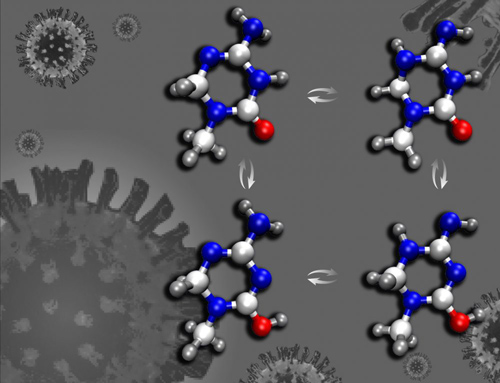 The anti-HIV drug KP1212 can alter its molecular structure to resemble natural DNA bases, allowing it to penetrate the virus’s immunological defenses without detection. The colors represent blue for nitrogen atoms, red for oxygen atoms, white for carbon atoms and silver for hydrogen atoms. Image courtesy of Sam Peng

“Two-dimensional infrared spectroscopy will be critical on the path ahead. It lets us look at the structures that exist in aqueous solution, which is the natural milieu of cells,” said study co-author John Essigmann, MIT’s William and Betsy Leitch Professor of Chemistry, Toxicology and Biological Engineering. Essigmann is co-founder of a pharmaceutical company that is developing mutagenic inhibitors of HIV.

“We also have done nuclear magnetic resonance, which is very informative, but those studies were done in organic solvents that probably do not as accurately provide a view of what happens in cells as did the infrared studies done by the Tokmakoff group,” Essigmann said. 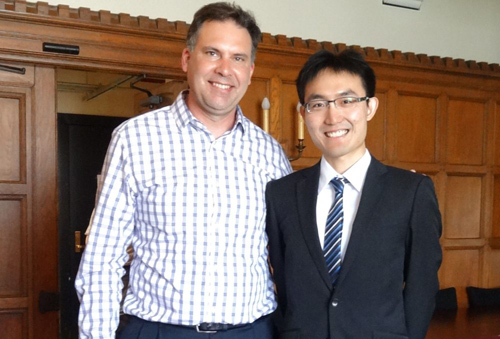 Prof. Andrei Tokmakoff (left) and Sam Peng, a visiting graduate research assistant in 2013-2014, worked with UChicago and MIT collaborators, using a range of chemical tools to better understand the molecular action of an anti-viral drug. Image courtesy of Sam Peng

Scientists design lethally mutagenic molecules such as KP1212 to resemble natural DNA bases, the adenine-thymine, cytosine-guanine base pairs. “These analogs can bind to the wrong base partners and therefore lead to genetic mutations,” said the study’s lead author, Sam Peng, who was a visiting graduate research assistant at UChicago.

KP1212 is a cytosine variation, which normally would pair with guanine during replication. But biochemical experiments and clinical trials have shown that KP1212 induces mutations by pairing with adenine. A leading proposal suggested that KP1212 derived its mutagenicity by shape shifting—converting into a different molecular structure by repositioning its hydrogen atoms on nitrogen and oxygen atoms.

Scientists call this shape-shifted structure a tautomer. James Watson, SB’47, and Francis Crick proposed this tautomer hypothesis in 1953 when they announced the discovery of DNA’s double-helical structure. “The shuffled hydrogen positions in rare tautomers alter the hydrogen bonding patterns, resulting in incorrect base paring,” said Peng, who completed his doctorate at MIT in 2014 and will become a postdoctoral scientist at Stanford University later this year. 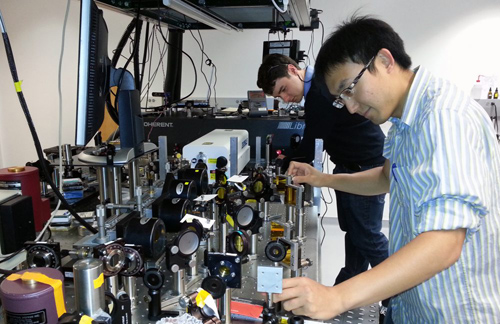 Most experimental tools would have difficulty distinguishing between the normal and shape-shifted structures because they interconvert very rapidly. With two-dimensional infrared spectroscopy, the UChicago team was able to distinguish between the two structures. The team also was able to measure how rapidly the shape shifting occurs under physiological conditions: in 20 billionths of a second.

The research team expected to find only two dominant tautomers, but their experiments showed that many more exist. In addition to taking on different forms as a neutral molecule, KP1212 also could accept an extra proton, giving it a positive charge at physiological levels of acidity—pH of approximately five and a half to seven—that made possible even more rearrangements and tautomer structures. “The number of possibilities exploded,” Tokmakoff said.

The finding that the molecule could become protonated both surprised and delighted Essigmann. The work taught his team how to create even more potent shape shifters—by decorating the KP1212 scaffold with groups of atoms and molecules that further raises their ability to capture protons.

“KP1212 is about 20 percent of the way toward being an ideal therapeutic mutagen. The hints given to us by the spectroscopy guide us toward even better mutagenic molecules,” Essigmann said.

Although Essigmann and Tokmakoff have known each other for years, they pursued seemingly far-removed research specialties until now. Tokmakoff’s biological research involves proteins, not DNA. But together their research teams were able to fruitfully undertake one of the first two-dimensional infrared spectroscopic studies of the therapeutic mechanism of an anti-viral drug.