AUSTIN, Texas — Middle-school girls who value sex appeal differ from their peers in troubling ways, according to new research from The University of Texas at Austin.

Co-authors Rebecca Bigler, professor of psychology, and Sarah McKenney, a former psychology graduate student, found that 10- to 15-year-old girls with higher levels of “internalized sexualization” — a belief that it is important to be sexually attractive — earned lower grades in school and scored lower on standardized tests of academic achievement than their peers. 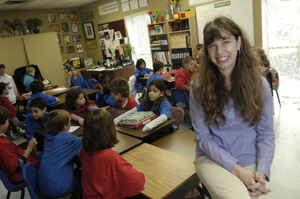 Rebecca Bigler, Professor of Psychology. Photo credit: The University of Texas at Austin

“Those girls who believe that being sexually attractive to males is important appear to invest more of their time and effort in that domain,” Bigler says. “Because everyone’s resources are limited, the investment in sexiness comes at the expense of other domains, including academics.”

According to the researchers, even Halloween costume choices for girls may reflect a damaging preoccupation with being sexually attractive. Boys frequently have a multitude of costume options, ranging from scary to funny and from nerdy to powerful, while girls’ costumes are more limited in scope and are increasingly sexualized with features such as a fitted bodice, a short skirt and high heels.

“The solitary act of wearing a sexy costume may not negatively affect a girl’s development, but continued exposure to sexualized messages can lead to body dissatisfaction, disordered eating, low self-esteem and depression among women,” says Bigler, who recommends that parents support their child’s choice of theme (“Oh, you want to be cat! That would be fun!”), and then commit to a search for a nonsexualized costume. Parents can explicitly label the costume features (e.g., high heels, fishnet stockings) that they find objectionable, and stress that competence — rather than sexiness — is a guise worth adopting.

In a separate study to be published by McKenney and Bigler in The Journal of Early Adolescence, scores on an internalized sexualization scale are used to predict the degree to which 11- to 15-year-old girls wear tight and revealing clothing. The researchers note that although some feminists have claimed that sexual desirability might be a source of empowerment for women, the girls with higher levels of sexualization in the study showed higher rates of body shame than their peers.

“Media images of sexualized women are typically idealized through enhanced photographs,” says McKenney, who now works as an evaluator in the New York City Department of Health and Mental Hygiene. “Girls who value and emulate the sexual allure of such models are likely to be disappointed by the comparison of their own bodies to such images.”