Sensor in eye could track pressure changes, monitor for glaucoma

Your eye could someday house its own high-tech information center, tracking important changes and letting you know when it’s time to see an eye doctor.

University of Washington engineers have designed a low-power sensor that could be placed permanently in a person’s eye to track hard-to-measure changes in eye pressure. The sensor would be embedded with an artificial lens during cataract surgery and would detect pressure changes instantaneously, then transmit the data wirelessly using radio frequency waves.

The researchers recently published their results in the Journal of Micromechanics and Microengineering and filed patents on an initial prototype of the pressure-monitoring device.

“No one has ever put electronics inside the lens of the eye, so this is a little more radical,” said Karl Böhringer, a UW professor of electrical engineering and of bioengineering. “We have shown this is possible in principle. If you can fit this sensor device into an intraocular lens implant during cataract surgery, it won’t require any further surgery for patients.”

The research team wanted to find an easy way to measure eye pressure for management of glaucoma, a group of diseases that damage the eye’s optic nerve and can cause blindness. Right now there are two ways to check eye pressure, but both require a visit to the ophthalmologist. At most, patients at risk for glaucoma may only get their pressure checked several times a year, said Tueng Shen, a collaborator and UW professor of ophthalmology. 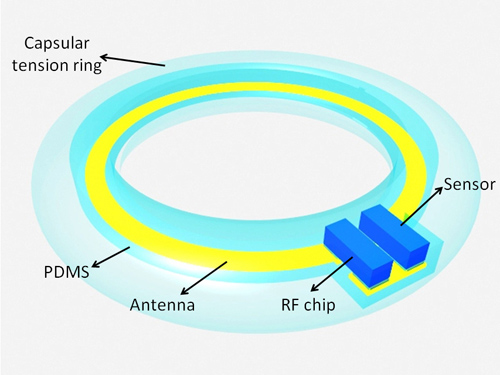 An illustration of the final device. The device would be placed in an artificial lens with its antenna circling the perimeter, and the sensor and radio frequency chip inside. Image credit: U of Washington

But if ophthalmologists could insert a pressure monitoring system in the eye with an artificial lens during cataract surgery – now a common procedure performed on 3 million to 4 million people each year to remove blurry vision or glare caused by a hazy lens – that could save patients from a second surgery and essentially make their replacement lens “smarter” and more functional.

“The implementation of the monitoring device has to be well-suited clinically and must be designed to be simple and reliable,” Shen said. “We want every surgeon who does cataract surgeries to be able to use this.”

The UW engineering team, which includes Brian Otis, an associate professor of electrical engineering and also with Google Inc., and Cagdas Varel and Yi-Chun Shih, both former doctoral students in electrical engineering, built a prototype that uses radio frequency for wireless power and data transfer. A thin, circular antenna spans the perimeter of the device – roughly tracing a person’s iris – and harnesses enough energy from the surrounding field to power a small pressure sensor chip. The chip communicates with a close-by receiver about any shifts in frequency, which signify a change in pressure. Actual pressure is then calculated and those changes are tracked and recorded in real-time.

The chip’s processing mechanism is actually very simple, leaving the computational heavy lifting to the nearby receiver, which could be a handheld device or possibly built into a smartphone, Böhringer said.

The current prototype is larger than it would need to be to fit into an artificial lens, but the research team is confident it can be downscaled through more engineering. The team has successfully tested the sensing device embedded in the same flexible silicon material that’s used to create artificial lenses in cataract surgeries.

Similar to how a person’s blood pressure varies throughout the day with activity levels, eye pressure is thought to behave similarly, changing perhaps minute by minute. If the pressure in the eye is too high for the optic nerve to function, however, damage to the eye can begin, often with no pain or warning signs. This increased intraocular pressure is the main factor in glaucoma, which causes vision loss and ultimately blindness.

“Oftentimes damage to vision is noticed late in the game, and we can’t treat patients effectively by the time they are diagnosed with glaucoma,” Shen said. “Or, if medications are given, there’s no consistent way to check their effectiveness.”

As a result, many patients with the disease aren’t diagnosed early enough or aren’t on an accurate treatment plan, she added.

Both cataracts and glaucoma affect a similar aging population so it seems a natural pairing to place a pressure monitoring device in a new lens during cataract surgery, researchers said.

The team is working on downscaling the prototype to be tested in an actual artificial lens. Designing a final product that’s affordable for patients is the ultimate goal, researchers said.

“I think if the cost is reasonable and if the new device offers information that’s not measureable by current technology, patients and surgeons would be really eager to adopt it,” Shen said.

The research was funded by the Coulter Foundation and the UW. Buddy Ratner, a UW professor of bioengineering and of chemical engineering, and Felix Simonovsky, a UW bioengineering research scientist, also contributed to this work.